His name has been chanted by demonstrators around the globe, his face displayed on murals across America.

Since his death, George Floyd has embodied the black victims of police violence and racism in the United States.

Accountability of sorts has been delivered: Mr Floyd's killer, the white former Minneapolis police officer Derek Chauvin, was convicted of murder in a case that triggered a moral reckoning on race and white supremacy far beyond America's borders.

George Floyd "was a big man, he was too big for this earth," his former girlfriend of three years, Courteney Ross, told reporters shortly before the verdict was read. "He is all over us right now."

Asked how he likely would have felt about the verdict, Ms Ross said Mr Floyd would argue that "now is a time for us to come together."

The crime was recorded on a mobile phone, and Mr Floyd's final minutes were seen around the world and replayed multiple times to the trial jury.

The killing, which kicked off the biggest civil rights protests in the US since the 1960s, ended a life marked by hardship but also generosity.

Standing at 1.93m (6'4"), George Floyd was known to friends and family as a "gentle giant," a rapper and athlete who suffered run-ins with the law and addiction but who wanted the best for his children. 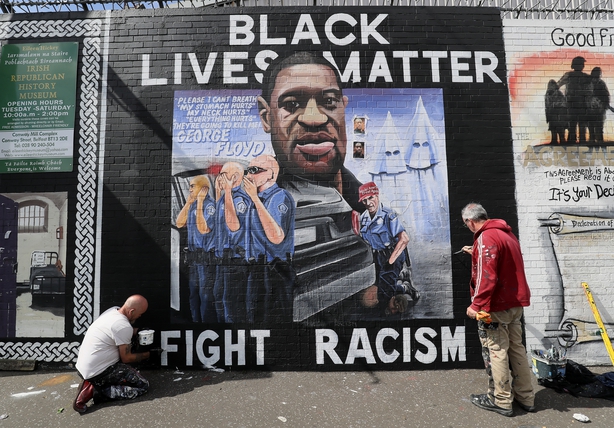 His mother, for whom he cried out when he was dying, moved to Houston shortly after he was born in 1973 in North Carolina.

He grew up in the Third Ward, a poor and predominantly African-American neighbourhood in central Houston.

"We didn't have a whole lot, but we always had each other," his cousin Shareeduh Tate said during a memorial gathering last year in Minneapolis.

At Jake Yates High School, he played the role of big brother to a lot of the local boys.

"He was teaching us how to be a man because he was in the world already before us," his younger brother Philonise, who testified last week at the trial, said at the 2020 memorial.

George Floyd stood out on the football field and excelled at basketball, playing the latter sport when he went to college.

"He was a monster on the court," said Philonise. "But in life, in general, talking to people, a gentle giant."

He dropped out of college and came back to Houston to help out his family.

In the 1990s, he threw himself into Houston's hip-hop circuit under the name of "Big Floyd," where he enjoyed modest success.

But he could not escape the violence of Houston's underground scene, and was arrested several times for thefts and drug dealing.

Local media said he was jailed in the early 2000s for armed burglary, serving four years.

After prison, he turned to religion and fell in with the pastor of a church in the Third Ward, using his notoriety and his love of basketball star Lebron James to draw in young men to the ministry, where he taught them religion and coached them in basketball.

Mr Floyd moved to Minneapolis in 2014 for a "change of scenery" and to look for more stable employment to help support the mother of his newborn daughter Gianna.

He worked as a truck driver for the Salvation Army and then as a bouncer at a bar, a job he lost when the city's restaurants shut down because of the coronavirus pandemic.

"I got my shortcomings and my flaws, and I ain't better than nobody else," he wrote on Instagram in 2017.

"But, man, the shootings that's going on, man, I don't care what religion you're from, man, or where you're at, man. I love you, and God love you, man. Put them guns down, man."

Ms Ross testified that both she and Mr Floyd struggled with opioid addiction as they sought to alleviate chronic pain.

"We got addicted and tried really hard to break that addiction, many times," she told the court.

On 25 May 2020, George Floyd bought a pack of cigarettes from a shop in Minneapolis.

The shopkeeper suspected him of using a counterfeit $20 bill, and called the police.

Mr Floyd, who had taken fentanyl, ended up in a struggle with police.

He was forced face down to the ground and was handcuffed, while Chauvin used his knee to pin him to the ground.

In footage of his killing he can be heard begging for his mother and for relief.

His final words were "I can't breathe."

He was buried in June in Houston, next to his mother Larcenia, who died in 2018 and whose nickname "Cissy" he had tattooed on his chest.

In Minneapolis, the site of his murder has become a flower-covered de facto memorial.