US President Donald Trump has said, without evidence, that if "legal votes" are counted, he would "easily win" the presidential election.

Addressing the media at the White House this evening, Mr Trump accused Democrats of "trying to steal the election".

Speaking for nearly 17 minutes, he said: "They're trying to rig the election, and we can't let that happen."

Trump's complaints were specifically targeting the integrity of the huge number of ballots that were mailed in, rather than cast in person on election day.

The big shift to postal ballots this year reflected the desire of voters to avoid risking exposure to Covid-19 in crowded polling stations during a pandemic that has already killed more than 230,000 Americans.

However, because Mr Trump often denied the seriousness of the virus and told his supporters not to support mail-in ballots, far fewer Republicans took advantage of the option compared to Democrats.

Biden, 77, was just one or two battleground states away from securing the majority to take the White House.

Trump, 74, needed an increasingly unlikely combination of wins in multiple states to stay in power.

In comments to reporters in his hometown of Wilmington, Delaware, Biden said "we continue to feel very good.

"We have no doubt that when the count is finished, Senator (Kamala) Harris and I will be declared the winners," he said. 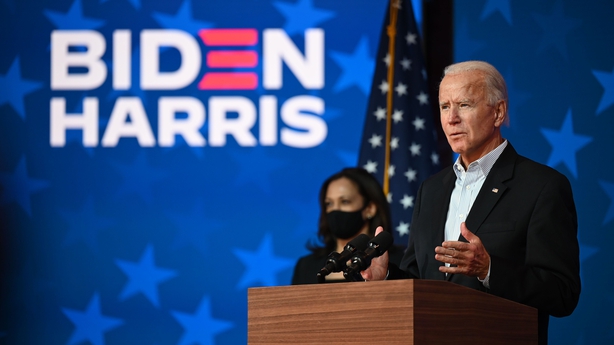 Trump, who shocked the world in 2016 when he won the presidency in his first ever run for public office, lashed out in a series of written statements before holding the White House appearance –  the first in public since the night of Tuesday's election.

"The process is working," he said in Wilmington. "The count is being completed. And we will know soon."

No one is going to take our democracy away from us. Not now, not ever.

America has come too far, fought too many battles, and endured too much to let that happen.

In Georgia, a generally Republican state, Trump had a razor thin and steadily slipping lead of less than 3,500.

With 98% of ballots already counted, the president and Biden were headed to a photo finish.

In Arizona and Nevada, Biden held on to slim leads. If Biden wins both those states he would also win the presidency.

But the biggest piece of the puzzle was Pennsylvania, where Trump's early lead was again steadily draining away, as election officials homed in on processing mail-in ballots, which are more typically cast by Biden supporters.

The Democratic hopeful currently has 253 of the 538 electoral votes divvied up between the country's 50 states - and 264 with the inclusion of Arizona, which Fox News and the Associated Press have called in his favour.

If Biden took Pennsylvania, he would grab 20 more electoral votes - which would instantly take him over the top of the 270 needed for overall victory.

With just over 325,000 ballots outstanding, the official overseeing elections in Pennsylvania, Kathy Boockvar, told an early evening press conference she could not give an estimate for a complete count.

"It's very close in Pennsylvania, right?" She said. "So that means it's going to take longer to actually see who the winner is."

The latest results show Trump's lead in the state has shrunk to around 61,000 votes.

However, Trump's campaign continued to insist that the president has a way to win, citing pockets of Republican support yet to be counted in such close races.

But Trump's overwhelming focus was on claiming, without evidence, that he was a victim of mass fraud.

The Republican president prematurely declared victory yesterday and threatened to seek Supreme Court intervention to stop vote-counting but it has continued nonetheless.

Since then, his team fanned out across the battleground states challenging the results in court and staging a series of press conferences where supporters lodged allegations of irregularities.

"STOP THE COUNT!" Trump tweeted on Thursday, referring to his claim that the mail-in ballots in particular are fraudulent.

But while Trump was demanding that counting be halted in Georgia and Pennsylvania - where he is leading - his supporters and campaign insisted that it continue in Arizona and Nevada, where he is trailing.

The campaign has announced lawsuits in Georgia, Nevada and Pennsylvania and Michigan - where it has already been dismissed - as well as demanding a recount in Wisconsin, where Biden won by just 20,000 votes.

Bob Bauer, a lawyer for the Biden campaign, dismissed the slew of lawsuits as "meritless."

"All of this is intended to create a large cloud," Bauer said. "But it's not a very thick cloud. We see through it. So do the courts and so do election officials."

If victorious, Joe Biden will face a tough battle to govern, with Republicans appearing poised to keep control of the US Senate and likely block large parts of his legislative agenda, including expanding healthcare and fighting climate change.

In the nationwide popular vote, Mr Biden is comfortably ahead of Mr Trump, with 3.6 million more votes. 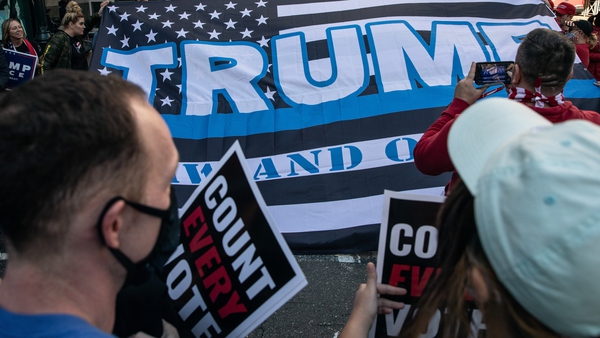 US Election 2020: Presidential race comes down to close contests in five states