A rally is taking place in Belfast to demand the authorities keep a promise to provide vital services for vulnerable women.

It has been organised by the trade union movement and grew out of a 12-week sit-in in January to prevent the closure of the only women's hostel in west Belfast.

Staff refused to leave when its closure was announced.

There was nowhere else for residents to go and it meant the workers would lose their jobs.

The occupation only ended in May when the authorities agreed to find alternative accommodation for the women who lived there, and to provide a new hostel.

However despite that assurance being given in May, the new hostel has not been delivered.

Susan Fitzgerald of Unite said the rally was being supported by the Irish Congress of Trade Unions and women's organisations.

And she said it had a wider focus than just the issue of the provision of a new hostel.

"When we came to organise the protest we were compelled to look at the reasons why women need a hostel like that," she said. 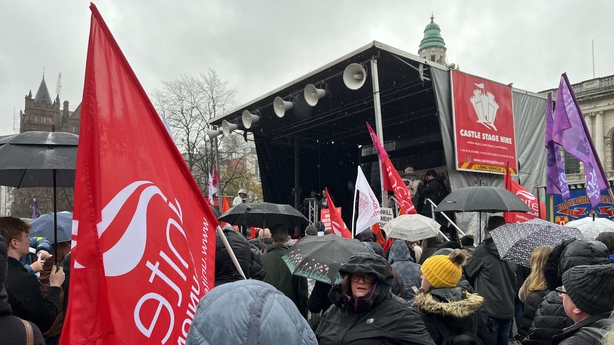 "It's low pay, it's the cost of living crisis, it's gender violence, it's the the lack of affordable and accessible childcare. It's a whole host of issues.

"The pressure in a crisis is often amplified for women so today is about saying `no more, we re not going to be the shock absorbers of crisis` and women demand better," Ms Fitzgerald added

She was asked whether political instability at Stormont was contributing to the crisis.

"Ordinary people are fighting for their actual survival in the worst cost of living crisis in a generation. There are people who can't heat their homes, their oil tanks are empty, and so is their patience."