The moderator of the General Assembly of the Presbyterian Church in Ireland, Reverend David Bruce, has said that he "did not receive any concerns or reasons to change tack" during engagement with the Department of Foreign Affairs on the preparations for an event to mark the centenary of Northern Ireland.

Rev Dr Bruce said that if he had, the church leaders "would have responded very carefully".

Speaking on RTÉ's Drivetime, Dr Bruce said: "We had a series of meetings and correspondence with representatives of the Department of Foreign Affairs as the concept was developed, as I've said, and I think I need to say that we did not receive any concerns or reasons to change tack.

"I think if we had, if concerns had been raised with us as a group of church leaders, then of course we would have responded very carefully to that."

He said that he believes Michael D Higgins when he said that he did express his concerns, but this was not communicated with church leaders.

"We're certainly saying that no concerns were communicated to us. I've no doubt that what President Higgins said is accurate, that he did indeed express his concerns, but for whatever reason those concerns did not reach us."

He said that there were "different visions" of what type of event should be planned and he was aware that it was going to be "highly contentious".

The concept and idea, including the title, was decided on after a "series of exchanges over a number of months", he said.

"We followed the normal channels, which in our case is the Northern Ireland Office in relation to the United Kingdom government and the Department of Foreign Affairs of course in Dublin, in relation to the Áras, and we had a series of exchanges over a number of months in which we developed the concept and the idea, including the title and the format of the service."

He added: "The last thing we wanted to do in creating this service was to politicise it.

"We knew, obviously, that there would be those who would welcome the opportunity to mark the centenary, just as there would be those who would lament the fact of partition, so we were aware that we were entering into a contentious space in doing this, so the last thing we would want to do, would have wanted to do, either by the title or the structure or the content of the service, was to alienate any part of the group of participants who we were inviting to be there." 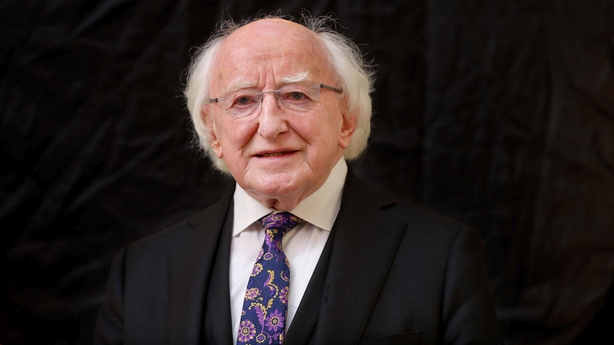 He said that he has "huge admiration" for Michael D Higgins and there is a "sense of sadness" that he will not be attending.

"The symbolism of having a head of state present of course extends beyond just the individual. I do need to say this - I have huge admiration for Michael D Higgins as President of Ireland.

"I applaud his record over the years, and being involved in reconciliation, north and south, and his engagement with different bodies - bodies with whom he may intuitively disagree.

"I think he has been a model in relation to that, as indeed his predecessors in the office of president, so there's no personal animosity here from the church leaders in this respect.

"I think there's a sense of sadness that his presence, his lack of presence, his absence from this service will in some important respects diminish the symbolic importance of the event."

When asked if it was the wrong decision by the President, Dr Bruce said: "I'm certainly not going to say that, I think the President is master in his own house and he is entitled as a head of state to make decisions which he considers to be appropriate for his office and in this case he has done that.

"I'm not going to second guess that. I'm not going to question that. I accept it and I think all the church leaders acknowledge that we would much prefer if he had found it possible to attend, but given that he hasn't we will of course press on with the service.

"We will continue to organise it and trust that those who watch it online and who are present in the cathedral will find it to be a space of reflection and hope for the future."

He said that he also could not comment on whether Britain's Queen Elizabeth will be attending.