Mass vaccination centres in Northern Ireland saw a surge in activity today as they administered first doses to adults for the last time.

Operations at the main centres are being phased out in the coming weeks as the programme adjusts how the majority of jabs are delivered.

First doses were available to adults for the last time today with second doses continuing to be administered in the centres in the coming weeks.

A number of first doses will still be given at the centres to specific groups of eligible under-18s.

Eight more deaths of patients who had tested positive for Covid-19 were reported today, along with 1,117 new confirmed cases of the virus.

The mass vaccination centres, which have done much of the heavy lifting during the roll-out, are being gradually stood down to enable redeployed staff to return to other health service roles.

This will mean the SSE Arena in Belfast and the leisure centres that have facilitated the vaccination programme will be able to resume their normal functions.

Vaccines will continue to be available through pharmacies and mobile clinics.

Community pharmacies will expand their vaccination programmes with the addition of the Moderna vaccine.

The new service will initially see 16 pharmacies offer Moderna, with more pharmacies being added to the service on a rolling basis over the coming weeks. 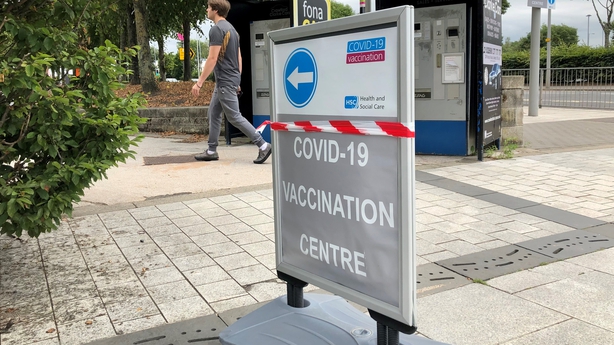 Queues formed outside the SSE Arena this afternoon as people arrived to get jabbed before the deadline.

Dawn McKee, the lead nurse at the SSE arena, welcomed the scenes. "We're very encouraged by the results today," she told the BBC.

"People have appeared from nowhere, lots of younger people coming in now. I think they've decided that it's time to get vaccinated."

Health officials have been concerned at the relatively low uptake rates among the under 30s.

While more than 83% of the adult population have received first doses of a Covid-19 vaccine, the rate is only around 60% for the 18 to 29-year-old cohort.

The system for securing certification was partially suspended on Tuesday after issues with data sharing emerged.

It is being phased back in with priority being given to those planning to travel in the coming days. Today, it opened to applications for those travelling on 2 August.