A section of a disused canal in the border region of Monaghan and Fermanagh will be restored and reopened as a public amenity more than 90 years after it was abandoned.

The final piece of a €12 million fund to restore the Clones to Clonfad stretch of the Ulster Canal has been announced today.

€5.5 million will come from the Rural Regeneration and Development Fund, in addition to €6 million already committed to the project from the Taoiseach's "Shared Island Fund".

The Ulster Canal opened for trade traffic in 1841 but fell into disrepair as the road and rail network improved.

The money will be spent on transforming the overgrown ditches where the canal once flowed into a 1km stretch of water with a 40 berth marina.

Two new bridges will be built and a third heritage bridge will be restored.

There will also be a tow path, walking trails, parking and an amenity area.

It is expected the water part of the project will be finished by the middle of 2023, while some land-based amenities won't be completed until the early part of 2024.

The Ulster Canal zig zags between Ireland and Northern Ireland, and in some parts, the canal itself is the border.

It is hoped the project will attract tourism to the area and benefit communities North and South.

Announcing the extra €5.5 million funding today, Minister for Rural and Community Development Heather Humphreys said the Ulster Canal is "hugely important" for the border region and that despite lying idle for many years, it has been "a beacon of hope for the people of this region".

She said that communities north and south who faced difficulties as a result of the Troubles will benefit through tourism and increased economic activity.

"The Ulster Canal, when finished, will be a unique project that will remind us of the benefits of peace and reconciliation across this island", she said.

Waterways Ireland, one of the cross-border bodies set up under the Good Friday Agreement, will carry out the work.

"Initially it's predominantly going to be people who want to swim, kayak, canoe, play water polo", he said, adding that those who like to walk, cycle or run, will come for the new tow-paths.

This is the second of three phases in the project to restore the 13km stretch of the Ulster Canal from Lough Erne in Fermanagh to Clones in Monaghan. 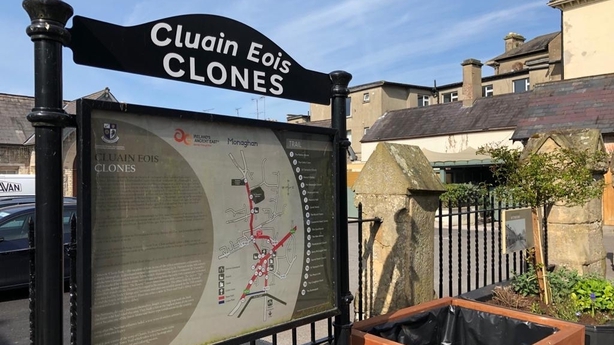 However, it won't immediately be connected to the waterway network and will require the third section spanning 10km to be completed before it can be opened to boats.

Mr McDonagh said that stretch will be more complicated, as it crosses the border between North and South four times, and will bring a more complex planning process.

But eventually, when completed, he says it will connect Clones "the whole way across all of our navigations through the island of Ireland and that will allow people to come from boats anywhere on the water system, directly here to Clones".

"Essentially you can get in your boat in Limerick and come up the Shannon, come across the Shannon-Erne system, come through Lough Erne in Fermanagh, and then come onto the 13.5km stretch at Castle Saunderson the whole way to Clones."

The Taoiseach, through the Shared Island fund, has already announced €6 million for this project along with another €1 million for initial planning for work on phase 3.

He described the funding as "concrete action" that puts "flesh on the bones" of the restoration plan.

"The overall vision is that we have a tourism facility and recreational amenity that is world class, that will facilitate the movement of people north and south, enjoying it, but also that people overseas will come."

Northern Ireland's Infrastructure Minister Nichola Mallon said the funding is "another step forward for this hugely exciting all island project".

Minister Mallon said it will benefit the local community and "enhance opportunities for our economy right across our island".

The idea that Clones could become a tourist attraction for those who enjoy the great outdoors was welcome news for people living and working in the area.

Hugh Tunney grew up across the road from the Ulster Canal Stores, where he is now the manager.

"The last boat went up it in 1929", he said, adding that the advent of road and rail sealed the canals fate.

"It’ll be a huge advantage to Clones town. The whole idea of a water park amenity beside the already established Ulster Canal Stores, it’s a huge draw. It’s going to be a huge attraction for families here and tourists."

The planned marina in Clones is just a few hundred meters from the border with Co Fermanagh.

Just a two minute drive away is the Creighton Hotel, on Fermanagh Street in the heart of Clones town.

Hotel manager Patrick McCarville said the project would be "massive" for the town.

"We try hard to increase foot fall but it would be that landmark site that would bring people straight in as an attraction", he said.

"We would get a bit of passing trade, but you wouldn’t have the tourist side of it and people staying for long durations."

He said the canal and amenities would bring people directly to Clones.

"They’ll stay in the town. They’ll spend money in town, they’ll come eat here, stay, use retail facilities. It’s the one catalyst we need to get Clones regenerated", he said.

And the hotelier agrees it will help communities on both sides of the border.

"The hinterland of Clones is Fermanagh. By helping Clones you’re helping across the border. It really would build bridges literally north and south by doing that."

"It’s definitely been talked about for a long time. Now is the time for it to happen", he said,