Police in Northern Ireland are investigating a potential dissident republican plot to blow up a lorry due to cross the Irish Sea on Brexit day.

Officers are investigating a link to a ferry crossing to Scotland on 31 January and a bomb found on a heavy goods vehicle in Co Armagh earlier this week.

Police received a report that an explosive device was on a lorry in Belfast docks last Friday, the day the UK left the EU.

The report received by police claimed the ferry was due to travel to Scotland.

An intensive search was carried out, but nothing was found and the ferry sailed as planned.

But three days later, on Monday, officers received a further report that a device was attached to a lorry belonging to a named haulage company.

After a two-day operation, which involved the search of 400 vehicles, an explosive device was found attached to a heavy goods vehicle in the Silverwood Industrial Estate in Lurgan, Co Armagh.

It was made safe by British army bomb disposal officers.

"It could have caused death and very serious injury and harm to members of the public," he said.

"Those who planted this device were reckless or indeed to cause that level of harm."

Mr Clarke said those who created the device "did intend that the device would explode at around the time the UK left the EU".

He said warning calls were made to media outlets indicating a device had been left in a trailer.

The PSNI is making a statement on a device found on a lorry in Armagh | https://t.co/tNYRBSRUXh https://t.co/luCrUTUwFu

Mr Clarke said: "On Friday evening a warning or a call was made to a media outlet indicating a device had been left in a trailer on Belfast docks. It is very important to note that information was exceptionally sparse and limited.

"Subsequently to that call, a further call was received by a media outlet. That call contained substantially more detail. It gave us more detail of a commercial haulage company.

"The calls were made to the same media outlet.

"These bombs are made by terrorists. They are made to a standard that cannot guarantee any form of safety."

Mr Clarke added: "If the device was planted on a Friday, it was between Friday and Monday before they gave us the information that enables us to locate this (device). 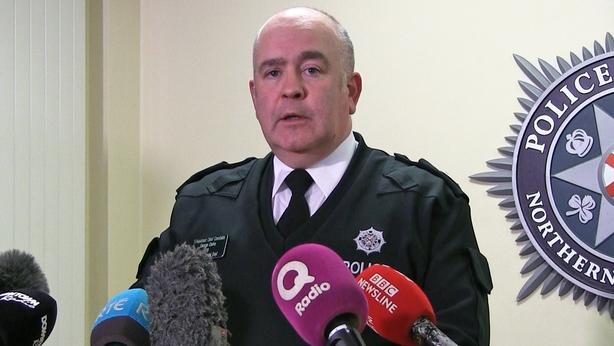 "During that period of time, a viable bomb is in a commercial yard posing a significant risk to anyone who comes within range of it."

He described the planting of the device in a public place as "an incredibly reckless activity".

Officers have appealed for anyone who saw anything suspicious in the industrial estate between 4pm and 10pm on Brexit day to come forward.

Detective Superintendent Sean Wright, from the PSNI Terrorism Investigation Unit, said: "It is clear from the information available to police that dissident republicans deliberately and recklessly attached an explosive device to a heavy goods vehicle in the full knowledge and expectation that it would put the driver of that vehicle, road users and the wider public at serious risk of injury and possible death.

"Had this vehicle travelled and the device had exploded at any point along the M1, across the Westlink (link road through Belfast) or into the Harbour estate the risks posed do not bear thinking about.

"The only conclusion that we can draw is that once again dissident republicans have shown a total disregard for the community, for businesses and for wider society."