Police retreated from a confrontation at a Belfast bonfire site over concerns innocent bystanders could be hurt, a senior commander has said.

He said he regretted the failure of an operation involving more than 150 officers to allow contractors to remove the wooden pallet pyre in the nationalist estate.

Young people climbed on top of the pile in triumph and the police operation ended with vehicles speeding from the estate under a hail of missiles.

Mr Todd said: "It is a question for me as a police commander.

"Am I going to continue ramping up the use of police force against a wider community with innocent members present?

"Including water cannon, including the potential for AEPs, commonly known as plastic bullets in parlance in the area.

"Am I prepared to do that merely to save face on behalf of the organisation and sacrifice public safety as a result? "The answer is, no I am not."

The withdrawal followed a stand-off with republican youths over the bonfire marking the introduction of internment without trial during the Troubles.

Missiles and metal fencing were hurled at officers. Police moved in early this morning to facilitate contractors tasked with removing the structure.

The officers were injured during sporadic bouts of violence. The estate was later barricaded using metal fencing following the police retreat.

This bonfire isn't wanted, it’s needs lifted & all the criminal behaviour needs dealt with @PSNIBelfastN & stat bodies. I’m not long back after visiting residents again & it’s clear the local families of those involved need to sit with the residents who are afraid & intimidated https://t.co/d60pX8Hsiv 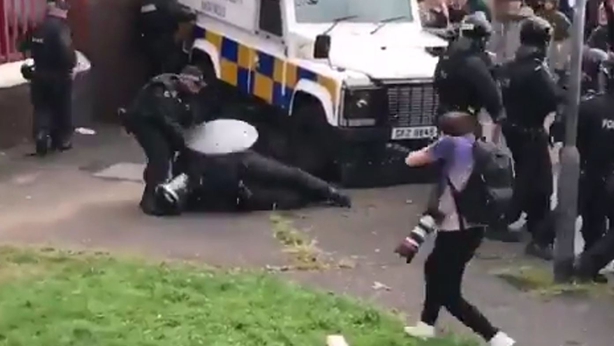 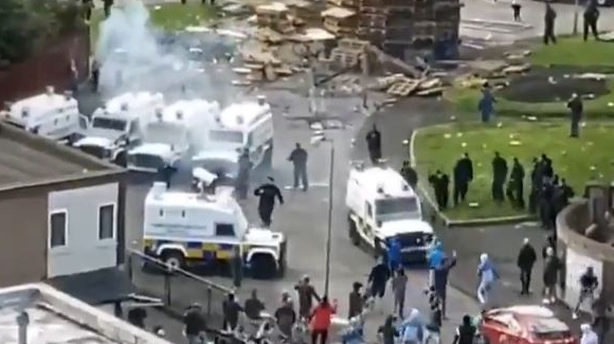 The bonfire was built on land owned by Northern Ireland's Department for Infrastructure.

The Housing Executive urged residents to leave the nearby Oisin and Fianna tower blocks as they cannot guarantee their safety, due to the proximity of the blaze.

Referencing the murder of journalist Lyra McKee by dissident republicans in Derry earlier this year during disturbances, Mr Todd said police did "not need to learn the lesson" of the risk to innocent bystanders.

Mr Todd said a significant number of women and children in the crowd were being used as human shields. 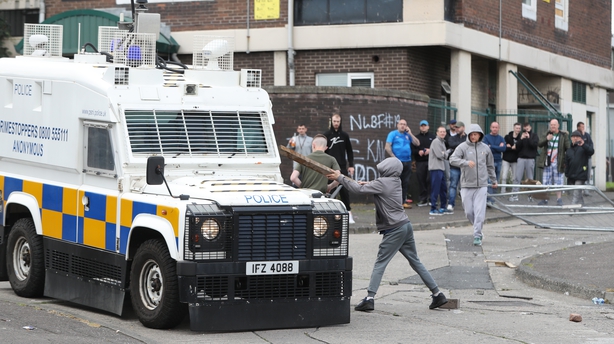 The senior commander said he had an obligation to minimise the use of force and the risk to public safety.

"I regrettably have had to take a decision today that the risks of continuing the operation to remove a bonfire were outweighed by the risks that operation would then pose to the wider community, to women and children and others there present.

"That is a matter of regret to me that we were not successful in the objective of the operation, but it is nonetheless a responsible, professional policing decision taken within the law and taken with very little room for other decisions to be made."

Earlier this week, politicians from both Sinn Féin and the SDLP said the people who live in the area do not want the bonfire.

Mark Lindsay, chair of the Police Federation for Northern Ireland, said officers trying to protect the community and lawful agencies are once again caught in the middle and in the firing line.

"This behaviour is contrary to the overwhelming wishes of the people of New Lodge who do not want this bonfire or their area hijacked by young thugs." 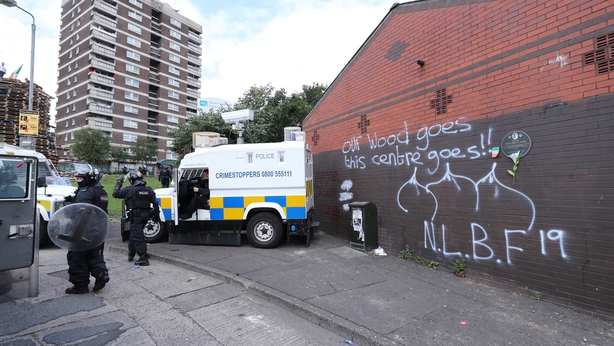 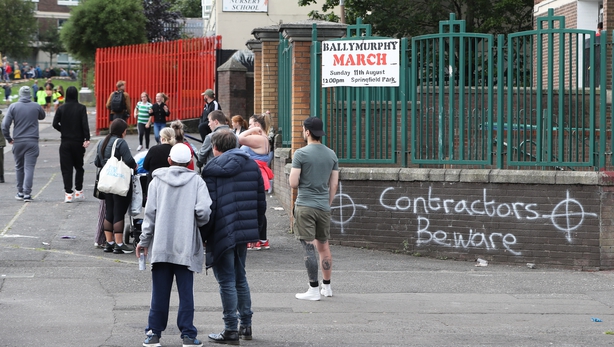 Graffiti appeared close to the pyre on Tuesday, threatening that if the structure is removed then a nearby community centre will be targeted.

Operation Demetrius in 1971 saw hundreds arrested across the region on suspicion of being involved with paramilitary groups.

The vast majority arrested were nationalists, although a significant number of them had no connection with the IRA.

The anniversary has traditionally been marked by many from the nationalist and republican tradition with bonfires, although recent years have seen a move away from pyres towards community-based diversionary activities.