Loyalists maintained an overnight presence at a contentious bonfire site in Belfast in anticipation of police and contractors moving in to demolish it.

A crowd gathered at the gates of the Avoniel Leisure Centre in the east of city in case the council-ordered intervention was carried out in the early hours.

Police did not act overnight, but bonfire builders still expect their arrival within the coming 24 hours.

The bonfire has been built in the car park of the centre.

Huge bonfires will be lit in loyalist areas across the North late tomorrow night to usher in the 12 July.

While most of the fires are lit without major incident, a number continue to prove contentious, with the authorities having taken action in recent years on structures deemed unsafe and posing a threat to nearby properties.

A Belfast City Council committee has voted to send contractors, under police escort, to take down the bonfire at Avoniel, with the local authority saying it is acting in the interests of protecting life and property.

The council closed the leisure centre early yesterday afternoon amid rising community tensions over the fate of the fire, and it remained closed today. 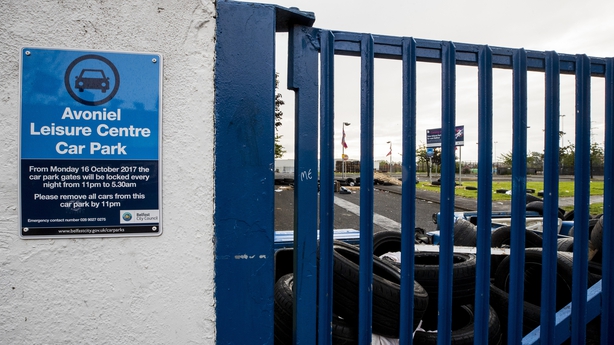 Loyalists have barricaded the gates with industrial bins and tyres in an effort to stop vehicles entering the site.

A secondary barricade - made up of tyres - has been placed further into the car park entrance.

Graffiti has been painted on nearby walls, warning against intervention.

Hundreds of loyalists attended a rally at the site last night - an event which saw nationalist councillors accused of waging a cultural war against the unionist community.

At the rally, Presbyterian minister and senior Orangeman Mervyn Gibson told people not to engage in criminal acts if the authorities intervened.

"I would appeal for calm at this bonfire," he said.

In Portadown, Co Armagh, residents of three apartment blocks in the Corcrain area have been urged to evacuate their homes due to concerns about the size of a bonfire built nearby.

However, several councillors claim that plan has now been ditched, with the council having been unable to secure a contractor willing to take down the bonfire, despite approaching more than 35 companies.