A woman who walked in on an alleged rape involving two Irish and Ulster rugby stars is central to the case, a court has heard.

A lawyer for accused Paddy Jackson said witness Dara Florence would have helped the alleged victim if she thought an attack was unfolding when she entered the bedroom where Mr Jackson and team-mate Stuart Olding were engaged in sexual activity with her.

Brendan Kelly QC told the jury of eight men and three women at Belfast Crown Court that in her evidence to the trial Ms Florence instead stated that the woman was showing no signs of distress.

"Dara Florence confirmed from what she could see (the woman) was not distressed," he said.

"Dara Florence was not stupid. She was articulate. She spoke clearly."

Mr Kelly added: "Dara Florence's evidence is extraordinary. In she walked and that was her conclusion."

Referring to Ms Florence's evidence that Mr Jackson asked her if she wanted to join in, Mr Kelly said: "What did they do to conceal (the rape)?"

He added: "When people commit crime they tend to hide, they tend to conceal what they did because they don't want to get caught.

"What did these two violent rapists do when she walked in? They invited her to join in. Dara Florence is absolutely central to this case."

The defence lawyer made the comments as he continued his closing submission to the jury.

Ms Florence was one of three women at the house party where the alleged rape took place. 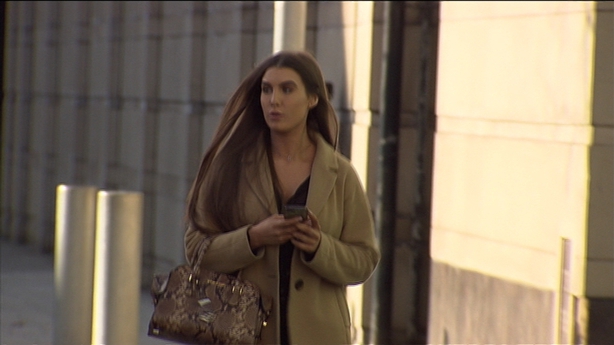 Mr Kelly said there was no sign that those women would have done anything other than help the alleged victim if they witnessed a rape.

"(The alleged victim) confirmed that the girls had been nice to her downstairs," he said.

"There was no suggestion made by (the woman) that they would do something other than help a girl of her age in those circumstances."

Mr Kelly added: "There was no sign from their behaviour that night that they would do anything other than help her if they witnessed her being raped.

"The backdrop is not a form of animosity. There was no enemy or foe presented in (witness) Dara Florence."

He also said that Ms Florence had no phone at the time when she walked in.

"Dara Florence had no telephone in her hand at the door. There were no pictures being taken at the door," he said.

Paddy Jackson, 26, from Oakleigh Park in Belfast, and Stuart Olding, 25, from Ardenlee Street in the city, deny raping the same woman after a night out in Belfast on 28 June 2016.

Two other men are also on trial on charges connected with the alleged attack.

Blane McIlroy, 26, from Royal Lodge Road in Belfast, denies one count of exposure.

Rory Harrison, 25, from Manse Road in the city, has pleaded not guilty to perverting the course of justice and withholding information.

The trial is in its seventh week.

Mr Jackson's defence has now concluded summing up the evidence.

The case was adjourned until Wednesday and the judge advised the jury to put the case out of their minds until then.