The first shipment of Ukrainian grain to leave Odessa since Russia's invasion has reached Turkey under a landmark deal to lift Moscow's naval blockade in the Black Sea.

The Sierra Leone-flagged Razoni arrived at the edge of the Bosphorus Strait shortly after Kyiv announced the start of mandatory evacuations from the war-scarred Donetsk region now bearing the brunt of Russia's five-month assault.

Officials in Turkey said that the shipment is expected to arrive safely, before continuing to its planned final destination, the Lebanese port of Tripoli, according to Turkey's Defence Ministry.

"The plan is for a ship to leave...every day," a senior Turkish official told Reuters, referring to Odesa and two other Ukrainian ports covered by the deal.

"If nothing goes wrong, exports will be made via one ship a day for a while."

The ship set sail under a deal brokered by Turkey and the United Nations aimed at getting millions of tonnes of trapped produce to world markets and curb a global food crisis.

It is due to be inspected near Istanbul by a team that includes Russian and Ukrainian officials before delivering its cargo of 26,000 tonnes of maize to Lebanon.

The halt of deliveries from Ukraine - one of the world's biggest grain exporters - has contributed to soaring food prices, hitting the world's poorest nations especially hard.

But it also accuses Russia of stealing Ukrainian grain in territories seized by Kremlin forces and then shipping it to allied countries in Africa and the Middle East, such as Syria.

Russia attacked the Odesa port from which the Razoni set off on Monday less than 24 hours after the grain deal was signed in Istanbul, putting the safety of future deliveries in doubt.

It has denied responsibility for the food crisis, saying Western sanctions have slowed its exports.

Ukrainian President Volodymyr Zelensky called the Razoni's departure "the first positive signal" but warned it was too early to predict how things would play out.

"We cannot have illusions that Russia will simply refrain from trying to disrupt Ukrainian exports," he said

Earlier, Lebanon's top prosecutor cleared a Syrian-flagged ship for release after it was seized over allegations by Kyiv's embassy in Beirut that it carried flour and barley stolen from Ukraine, an official has said. 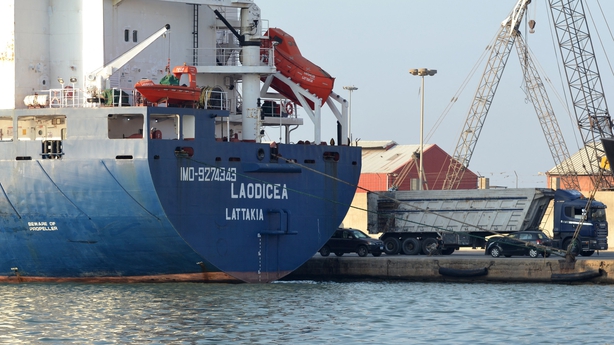 Prosecutor Ghassan Oueidat allowed the Laodicea, which docked in the northern port city of Tripoli last week, to set sail after investigations failed to prove it carried stolen goods, according to a judicial official.

"Preliminary investigations... did not reveal the existence of a criminal offence, or that the goods were stolen," the official said on condition of anonymity.

Ukraine's embassy in Lebanon had claimed that the grain aboard the ship was loaded from a region occupied by Russian forces and said it presented Lebanese authorities with proof that the merchandise was stolen.

Ukraine has repeatedly accused Moscow's forces of ransacking its grain warehouses since Russia invaded the country in late February.

On Saturday, Mr Oueidat ordered the vessel's seizure and instructed police to investigate.

The prosecutor found that the grain aboard the vessel belonged to a Syrian merchant, the judicial official said.

"The Syrian national whose name is on the shipment from Ukraine came in for investigation and presented the papers and documents that prove his ownership," the official said on today.

Russia has continued to pound cities and towns across Ukraine's sprawling front line.

Kyiv said it had started mandatory evacuations from the eastern region of Donetsk bearing the brunt of the Russian offensive after Mr Zelensky urged the estimated 200,000 remaining residents to leave.

More than 130 people were evacuated from the Donetsk region, governor Pavlo Kyrylenko said.

Officials have said they want to get residents out of the battered region before the start of winter as gas pipes for heating have been severed.

In the south of the country, the head of Ukraine's Kryviy Rig military administration said Russian shelling had killed two civilians in a minibus trying to leave the Moscow-controlled Kherson region.

Oleksander Vilkul said two other passengers were in serious condition in hospital with burns.

The mayor of the city of Mykolaiv, the closest to where Ukrainian forces are looking to launch a counter-offensive in Kherson, said Russian strikes had damaged a university dormitory.

He said in a briefing that 403 people had been killed in his region since the invasion but added that a looming Ukraine counter-offensive for the neighbouring Kherson region "will result in a decrease of shelling".

Ukraine was bolstered by more supplies of Western arms - particularly long-range artillery - as it looks to launch a major push in the south to retake Kherson.

The United States announced a new tranche of weapons worth $550 million for Ukraine's forces, including ammunition for increasingly important rocket launchers and artillery pieces.

"Our artillerymen are ready to turn night into day to expel the Russian invaders," Ukraine's Defence Minister Oleksiy Reznikov said.

In response, Russia accused the United States of direct involvement in the Ukraine war.

Russia said it was responding to comments by Ukraine's deputy head of military intelligence Vadym Skibitsky, about the way Kyiv used US-supplied long-range HIMARs rocket-launch systems based on what he called "excellent satellite imagery and real-time information".

Mr Skibitsky told Britain's Telegraph newspaper there was consultation between US and Ukrainian intelligence officials before strikes and that Washington had an effective veto on intended targets, though he said US officials were not providing direct targeting information.

Russia's defence ministry said the interview showed that Washington was entangled in the conflict despite repeated assertions that it was limiting its role to arms supplies because it did not want a direct confrontation with Moscow.

"All this undeniably proves that Washington, contrary to White House and Pentagon claims, is directly involved in the conflict in Ukraine," the Russian defence ministry said in a statement.

"It is the Biden administration that is directly responsible for all Kyiv-approved rocket attacks on residential areas and civilian infrastructure in populated areas of Donbas and other regions, which have resulted in mass deaths of civilians."

There was no immediate reaction to the ministry's allegations from the White House or Pentagon.

Mr Zelensky said that despite US supplies of artillery, Ukraine cannot completely overcome Russia's advantage in artillery and manpower.

Deliveries of sophisticated long-range weapons systems from Western nations to Ukraine are seen as vital if Kyiv's forces are to turn the tide of the war, in which Russia relies heavily on long-distance bombardments of urban areas.

He added in a late-night address that fighting in parts of the Donbas region is "just hell", and words "cannot describe it".

Fighters from Azov were among 2,500 Ukrainian soldiers who surrendered in May after weeks of fierce resistance at the Azovstal steel plant in devastated Mariupol.

The regiment - which was incorporated into Ukraine's national guard in 2014 - is demonised by Moscow for alleged far-right links.

Its members were among 50 Ukrainian servicemen killed last week in an attack on a jail holding prisoners of war in Russian-occupied territory.

Ukraine has accused Moscow of deliberately executing the detainees, while Russia says Ukrainian forces hit the facility with missiles.

Azov, in response to the Russian court ruling, called on the US and other countries to recognise Russia as a "terrorist state".