Protesters were greeted with a visibly heavy police presence as they converged on Trafalgar Square, where they rallied with a marching band and speeches.

The latest action - branded the 'Impossible Rebellion' - saw participants block roads leading to the square, deploying a large pink structure with the slogan "come to the table" written on it.

The giant "table" contains built-in lock-ons so protesters can attach themselves, sleeping quarters and its own stereo system, and activists are preparing to stay and occupy the site.

"What are you waiting for? Your local area to flood, or your street to get blocked with rubble and cars?" Extinction Rebellion's UK branch said on Twitter. 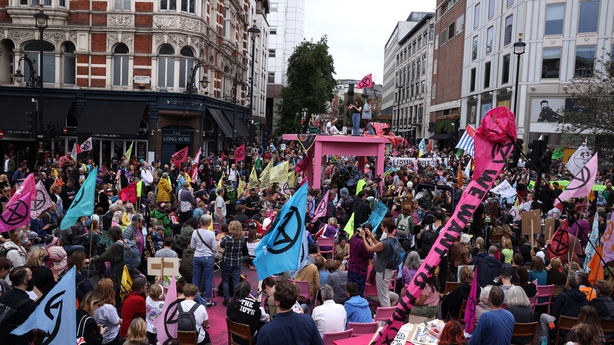 The group, formed in Britain in 2018, is a network of climate activists who use civil disobedience to spotlight inaction on global warming.

Since holding its first protests in London that year, activists have repeatedly brought parts of the capital and other cities to a standstill with carnival-like demonstrations.

They have also targeted individual businesses and premises in London for direct action, including newspapers' offices and energy companies' headquarters.

The rallies have spread to many countries around the world.

Police at previous UK protests have arrested hundreds of participants, but have also faced criticism for being too lenient.

Maddy Hayley Thomas, 33, was among those rallying at the first day of the demonstrations in London.

"What is extreme is the fact that the government, huge corporations, all of our system is allowing the devastation to our planet, to the global south," she said. 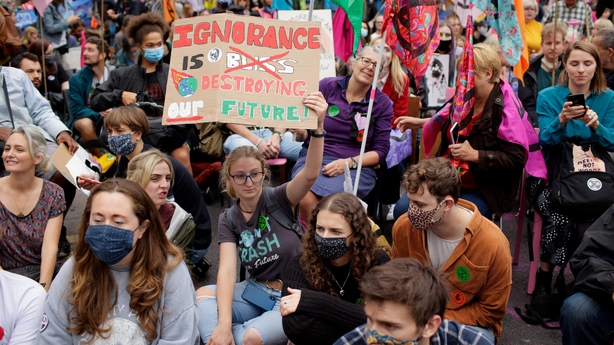 Extinction Rebellion's latest action comes as the UK government gears up to host the crucial COP26 United Nations climate summit in the Scottish city of Glasgow, in November.

It is set to draw thousands of delegates - and demonstrators - from around the world. Global leaders are under renewed pressure to agree radical policy changes at the summit following the publication this month of a UN climate science report called "terrifying" by campaigners.

It warned the world is on course to reach 1.5C of warming around 2030, much sooner than once predicted, and set to cause dire fallout impacting every continent.

Also today, London police were called to ITN's headquarters after a group of protesters "unlawfully gained access" to the building.

The demonstrators are understood to have forced their way into the building on Gray's Inn Road in Camden following an anti-vaccination and anti-lockdown protest in the city.

Images posted on social media by ITN staff showed dozens of people in its reception area, with police standing between them and security barriers into the main building.

A video circulated on Twitter showed protesters yelling abuse at veteran news anchor Jon Snow as he made his way in.