A farmer in England has been pulled to safety after his quad bike fell into an 18 metre sinkhole.

Emergency crews were called to the scene near Barrow-in-Furness in Cumbria at about 12.30pm yesterday.

A post on the Facebook page of Duddon and Furness Mountain Rescue Team said: "Cumbria Police called for assistance this afternoon, around 12.30pm, with a report of a casualty who had fallen 60ft into a sinkhole on their quad bike in a field.

"Once on site, the team assisted Cumbria Fire and Rescue Service extracting the casualty using safety lines and a rope system. 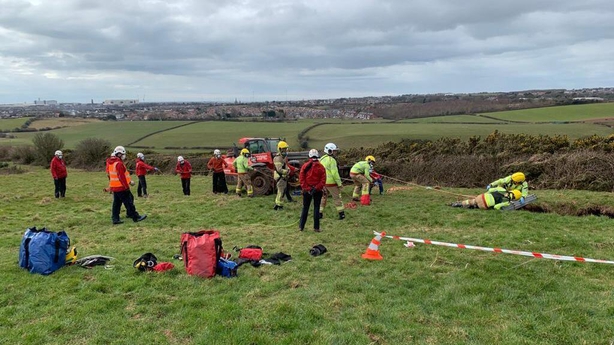 "The casualty was then transferred to the Great North Air Ambulance Service helicopter for transport to hospital.

"A great multi-agency effort by all involved."

Ian Westall, of Cumbria Fire and Rescue Service, told the BBC the man, a farmer, had been riding across the field when the sinkhole opened up.

He said: "We peered down and could see the farmer sat up, and we could just make out the outline of his bike under a mound of earth.

Crews from Barrow & Ulverston attended an incident where an individual had fallen 60ft into a sinkhole whilst riding a quad bike.

Alongside our colleagues from Mountain Rescue, we brought the individual to safety using line rescue equipment. Excellent multi-agency teamwork.???? pic.twitter.com/t2QNiLS6t2