Boris Johnson has arrived in Manchester for a Tory party conference which faces being overshadowed by moves to oust him at Westminster.

The British prime minister also faces pressure over his links with businesswoman Jennifer Arcuri while he was London mayor.

Mr Johnson refused to answer questions about his political and personal battles as he arrived with girlfriend Carrie Symonds at the Midland Hotel ahead of the conference, which begins tomorrow.

A small group of protesters gathered outside the ring of steel which surrounds the conference venue, and their anti-Brexit cries could be heard as Mr Johnson got out of his ministerial Jaguar.

"Boris is a liar" and "get your Johnson out of our democracy" were among the slogans chanted by the demonstrators.

The UK government's defeat in the Supreme Court and its failure to win a Commons vote to schedule a recess for the conference means that Tory MPs face shuttling between Manchester and Westminster to counter the threat of an ambush by opposition parties.

A senior SNP MP said the opposition parties could stage a vote of no-confidence in the government as early as next week in a bid to replace the prime minister with a caretaker leader who would secure an extension to the Brexit deadline.

Labour's Jeremy Corbyn is expected to convene another meeting of opposition leaders in Westminster on Monday to plot their next moves aimed at preventing a no-deal Brexit on 31 October.

Speaking to reporters at a rally in Chingford, Essex, Mr Corbyn said he stood ready to lead an interim government if Mr Johnson was forced from No 10.

Mr Johnson is also under pressure over his conduct as mayor after he was referred to the police complaints body to assess whether he should face a criminal investigation over his links with American businesswoman Ms Arcuri.

The Greater London Authority (GLA) said its monitoring officer had recorded a "conduct matter" against Mr Johnson over allegations Ms Arcuri received favourable treatment because of her friendship with him while he was mayor of London.

It follows a report by The Sunday Times that Ms Arcuri, an American who moved to London seven years ago, was given £126,000 in public money and was treated to privileged access to three foreign trade missions led by Mr Johnson while he was mayor.

The government has since frozen a £100,000 grant to Ms Arcuri's company, Hacker House, pending a review.

The Independent Office for Police Conduct (IOPC) will now consider whether there are grounds to investigate the prime minister for the criminal offence of misconduct in public office. 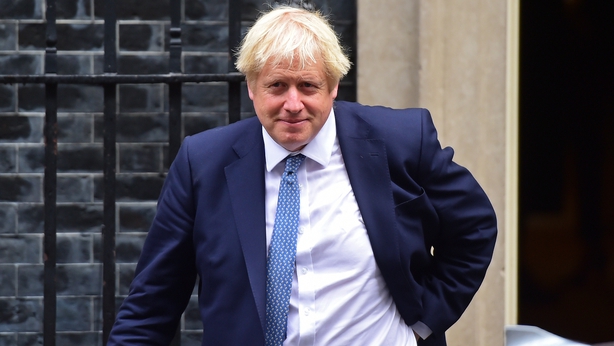 The move was greeted with fury in Downing Street, which denounced the referral by the GLA, led by Labour mayor Sadiq Khan, as a "nakedly political put-up job" on the eve of the party conference.

Cabinet minister Theresa Villiers said: "I think this whole thing has been blown out of all proportion."

The Environment Secretary told the BBC's Today programme: "This seems to be pretty obviously a politically motivated complaint.

"The prime minister has been clear there is nothing to see here. I do feel this is a distraction and it is people seeking to use the complaints process in a highly political way."

But Mr Corbyn told reporters: "A wholly independent assessment has looked at evidence of the payments made by the mayor's office to one particular company and says there are serious questions to answer.

"I think the job of the prime minister is to answer those questions."

In a statement, the GLA said that the monitoring officer, Emma Strain, had a "statutory duty" to record any conduct matters that she became aware of relating to the mayor in his role as police and crime commissioner for London.

"The 'conduct matter' has been recorded as allegations have been brought to the attention of the monitoring officer that Boris Johnson maintained a friendship with Jennifer Arcuri and as a result of that friendship allowed Ms Arcuri to participate in trade missions and receive sponsorship monies in circumstances when she and her companies could not have expected otherwise to receive those benefits," the GLA said.

"A 'conduct matter' exists where there is information that indicates that a criminal offence may have been committed. It does not mean that this is proved in any way.

"The IOPC will now consider if it is necessary for the matter to be investigated."

Mr Johnson has consistently denied any wrongdoing in relation to his friendship with Ms Arcuri.

A No 10 spokesman said: "The prime minister, as mayor of London, did a huge amount of work when selling our capital city around the world, beating the drum for London and the UK.

"Everything was done with propriety and in the normal way.

Shadow chancellor John McDonnell tweeted: "It's important to note that this was a decision by the GLA monitoring officer, who is a completely, independent non political official."

Earlier, Mr Johnson said that he would comply with an order by the London Assembly to provide details of his links with Ms Arcuri, although he insisted they were "barking up the wrong tree".

Digital Minister Matt Warman told the House of Commons that his department had done the "usual due diligence" and that the company had a British phone number.

However, numerous reports said calls to the number were directed to an office in California, where Ms Arcuri, 34, is said to now be based.