In all walks of life, there is the potential to be exposed to bullying. It is unacceptable anywhere. But it is especially insidious in the workplace, as this is where a person earns their livelihood.

In the health service, recent studies suggest a certain culture of bullying that is also driving some health staff abroad to work.

But it's even more serious, writes Health Correspondent Fergal Bowers.

If bullying in the health service results in some staff not reporting concerns about the working environment and patient care, or not highlighting mistakes that have occurred, that should be of great concern to everyone?

Stephen McMahon, of the Irish Patients' Association, said that the problem with bullying is that people are afraid to speak up.

The threat is that a person may lose their job, or promotional prospects.

The IPA says it is aware of several cases, including where a resident in a nursing home who alleges they were told that if they contacted the Health Information and Quality Authority, they would end up on the street.

In another case, a service provider lost their job working for a company when they made a complaint (whistleblew) about a client hospital.

Mr McMahon said that it is a responsibility of employers, institutions and society, to ensure that ordinary people, everywhere, at every age and whatever their occupation are protected from bullies.

Who does the bullying - managers, doctors, nurses?

The Health Service Executive says it does not have centralised data for allegations of bullying.

It said that many complaints are successfully resolved at local level, without recourse to formal investigation.

The HSE said it recognises the right of health service staff to be treated with dignity and respect.

It said it is fully committed to ensuring that all employees are provided with a safe, working environment, which is free from all forms of bullying.

There is a national 'Dignity at Work Policy for the Health Service'.

The HSE says it recognises that a culture of bullying and harassment, if unaddressed, undermines employee motivation and morale and adversely affects the quality of patient care.

The Medical Council did a survey recently which has some worrying findings.

It showed the prevalence of bullying in the training environment for doctors and that it has a notable impact on doctors leaving the country to work elsewhere.

There was a significant link between trainees' staying intentions and their experience of being undermined by a fellow consultant, or a GP in their working area.

The Irish Medical Organisation says it is "wholly opposed to bullying". 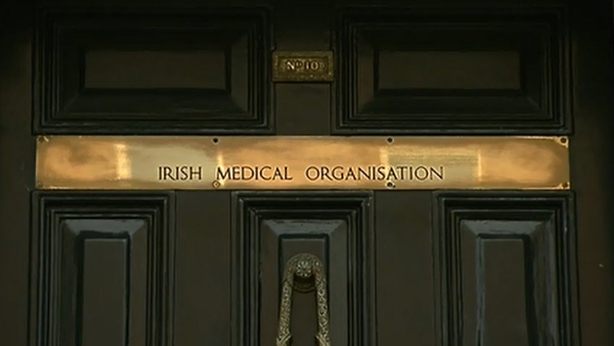 Dr John Duddy, the union's vice-president and chairperson of its Non Consultant Hospital Doctor Committee, says the IMO has dealt with a very small number of complaints over the years in relation to bullying issues from its members.

But he says the union is concerned that there is a level of under-reporting and a culture of just "getting on with it".

Dr Duddy strongly encourages anyone experiencing bullying, to avail of the internal structures to deal with such issues and to seek assistance from the union.

He says there is no substantive data as to whether the level of bullying among medical trainees, is any greater than the level among other grades or professions within the health service, or the workforce generally.

Any form of bullying is inconsistent with a positive working experience.

At the IMO's AGM in 2014, it passed a motion condemning bullying in the health service.

The health effects of bullying can be physical and psychological.

Is bullying professional misconduct for doctors and other professions?

The Medical Council which polices doctors' behaviour says it would depend on the seriousness of the allegation and whether the allegations affect a doctor's fitness to practise medicine.

The Council's annual report for 2014 contains some figures on complaints in relation to 'reporting concerns about colleagues' and 'professional relationships about colleagues' which it says would be the closest categories to bullying.

Bill Prasifka, the Chief Executive of the Medical Council, says the data on bullying in the medical profession has been a matter of concern for the Council, since the first Your Training Counts report published last year.

He says it raises concerns about the quality of life and wellbeing of doctors, with the associated link with poorer health and wellbeing for those experiencing bullying.

The Council says it is working with all parties involved in medical education to deal with the issue.

In April, the Irish Nurses and Midwives' Organisation published a large scale survey of the current levels of workplace bullying.

The study was in partnership with NUI Galway and the National College of Ireland.

It found that over the last four years, there has been an increase of over 13% in perceived incidences of bullying.

Almost 6% of respondents reported that they are bullied on an almost daily basis.

The percentage of non-union members who experience almost daily bullying was almost double that of union members.

The study found that Government cutbacks were a probable explanation for the significant rise in reported bullying between 2010 and 2014.

These findings are disturbing.

They may also explain the level of absenteeism, or illness among staff, in certain areas of the health service.

Most large organisations have anti-bullying policies in place but what about implementation?

A zero tolerance policy of bullying should exist and it should apply to all levels of staff.

The advice to anyone experiencing bullying is to stay calm and walk away, document any incidence, follow bullying procedures and seek support.

This is not just an Irish problem. It was raised recently at the European Junior Doctors Group.

The organisation says it is totally opposed to workplace bullying and is committed to tackling the issue in hospitals and healthcare centres throughout Europe.

The EJD says that national government and healthcare authorities should take all reasonable steps within their power to address this issue within the healthcare sector.

Bullying is one of those problems that can often remain hidden.

Yet usually when bullies are exposed, they are defeated.

Have you experienced bullying anywhere in the health sector - within the HSE, in a voluntary hospital, or health agency, within a health union?

Let me know at fergal.bowers@rte.ie