The Armoured Personnel Carrier crew dropped us off at 10pm. It was pitch black outside. The only sound was the wind blowing through the pine trees, a strengthening wind that blew a light mountain fog against us, coating everything in a damp sheen.

Lieutenant Forde told us to strap on our bergans (army backpacks) and begin the "tab" (walk) up to the Observation Post (OP) where we would spend the night.

It was an exercise, but to make it worthwhile it had to be done realistically; so there was no talking, no torches and no delaying as we headed up a muddy, rutted path, pocked with puddles and overhung by briars, bushes and foliage. There could be no alerting the enemy to our presence.

A few hundred metres into Glansheskin Forest (Gleann Seiscinn; the marshy glen) the shape of a machine gun carrying soldier loomed out of the darkness.

Then another. Whispered words with Lieutenant Forde confirmed they were from our OP and would escort us in.

The trip had been organised three weeks earlier when I got a call from the Defence Forces press office. I don’t mind admitting that I was immediately enthusiastic but had to spend some time working with RTÉ editors to establish where the news value in such an event would be.

Army manoeuvres always make great pictures but that does not necessarily mean they deserve a slot in RTÉ News programmes.

Then 1,100 km away in France, the Paris attacks happened. Suddenly there was increased interest everywhere in security forces dealing with terrorist threats. How well the Irish Army is trained moved up a few notches in newsworthiness.

The go-ahead given, I duly turned up in the Curragh Camp at 7.30am on Tuesday.

Along with two other journalists I was admitted to a briefing by army brass on exercise Dark Nights. It had been months in the planning and was designed to show how all sections of the army interact in a combat situation.

Infantry, armour, transport, intelligence, logistics and medical were all involved. It was going to be the biggest military exercise staged by the Irish Defence Forces for some years.

It came as a surprise to me and will to many who read this, that military attaches from Russia, the US and the UK were present for the briefing, some of which we were told was classified. You can interpret their presence any way you want!

Back in Glansheskin we tramped on toward the OP. Using an NV (night vision) enabled camera I captured some dramatic footage of ghostly looking soldiers silently passing through the trees. It was very atmospheric.

The OP was a lean-to made from branches arranged to look as natural as could be. Soldiers had set up their own camera to observe the “enemy” position on a hill 2km away.

Crouched inside they had a laptop to capture images, send intelligence reports and keep an eye on reports coming back from the exercise HQ. This all took place under a hood to conceal the light.

Soldiers sleep when they can and we were told to “bivvy” down for forty winks as everyone had to take part in the watch. My turn was from 11pm to midnight. Fortunately enough for a video journalist, the enemy were about!

(Soldiers, who for the purpose of the exercise were called Fantasians , descendants of an ethnic group that came from Fantasia to Ireland in the 15th Century.)

They sent up a number of flares known as Para Lumes to try to spot the OP. The flares powerfully illuminated the whole area as they brightly burned across the sky.

With the wind blowing them along and the light reflecting off the low cloud cover they created an otherworldly scene. More dramatic pictures for my report!

Then it was back to the bivvy for half an hour only to be awoken and told the journalists had to move out for real soldiers to take over. 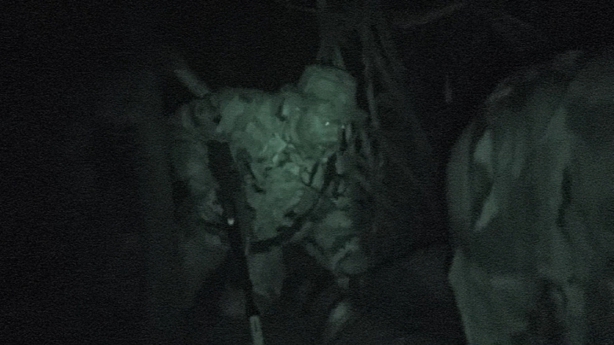 This was challenging; in the pitch dark we had to pack up the bivvy bag, sleeping bag, spare clothes, ration packs and in my case the camera, microphones and tripod and move deeper into the woods.

Noise was not such an issue now as the wind swirled through the tree tops. Our bed was the forest floor, surprisingly soft from all the pine needles and comfortable if you could avoid roots, stumps and stones.

I nodded off but awoke with the cold a few times. It wasn’t too bad considering it's November!

Glansheskin Forest is in the Kilworth Mountains, just south of Mitchelstown and the Defence Forces have an important training camp in the area.

A number of military convoys had converged there for the exercise which involved 650 men and women.

We were driven to the camp for breakfast and then back into the mountains to an RV (Rendezvous) point where the main troop body was assembling.

That was the beginning of a 3km tab up to higher ground with troops who were laden down with machine guns, rocket launchers, mortar bombs, ration packs and water.

2km in, the word came through that an attack was anticipated. Grist to the mill for the journalists and also for the soldiers who carry out these exercises all the time, but often without ever seeing any “real action ”.

I had advised Lieutenant Forde at the outset that some "boom boom bang bang" was necessary to make my report interesting and he didn’t let me down.

The firing kicked off a few hundred metres below us as the Fantasians ambushed Irish soldiers. Men and women dashed and dived for firing positions and cover.

The guns chattered through the smoke and spent shells flew from the weapons. I was in the thick of it with the camera! Great pictures, great fun! By the way did I mention earlier all the ammunition was blank? A very relevant point in all this.

All in all it was an impressive exercise, and would inspire confidence the Irish Army knows what it is doing. Of course this was conventional type warfare, while the risks nowadays are generally unconventional in nature.

Storming a hillside or defending a mountain-side forest will hardly arise if an IS type terror attack takes place. But as the man commanding exercise Dark Nights Lieutenant Colonel Mark Hearns told me, all the skill sets being put to the test are transferable and relevant in any other area of operations.