Mary Joyce and the others have made it an annual pilgrimage for years, writes Midlands Correspondent Ciaran Mullooly.

Mary's mission is straightforward: she comes back time and time again to the Castlepollard Mother and Baby Hospital because she is searching for her Aunt Carmel, who was just 17 years old when she came to this austere and bleak three-storey building run by the nuns in the countryside just outside Castlepollard.

Her 'sin' - to have become pregnant - and then moved into St Peter’s.

Mary says she is certain the baby was born here and she holds a death registration certificate to confirm the same infant died less than three weeks later at Tullamore hospital - more than 80km away.

“She died on December 13 1950 of hydrocephalus [water on the brain] and spina bifida" says Mary - who is still angry about what happened.

Every summer Mary and the rest of a small group of relatives now meet here to remember the dead and the missing.

For 36 years she has searched for any trace of her aunt - with no success - so the recent media interest in places like this and the hospitals run in Tuam and Cork is somewhat ironic in her eyes.

"For years nobody seemed to care - now we're on every news" - she remarks.

The baby plot in the cemetery here was located at the back of the Manor House and the maternity hospital - a good distance from the the road but, like so many of these institutions in the news this past few weeks, there's some doubt about the scale of the deaths that occurred here and a crucial lack of concrete evidence of where the young infants were actually laid to rest. 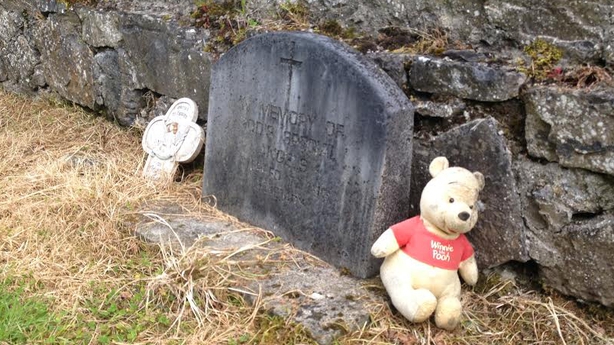 'In memory of God's special angels interred in this cemetary' (sic) says the inscription on the headstone now standing in a narrow well manicured enclosed garden at the bottom of a tarred old lane.

Inside the gate with the crucifix shaped in wrought iron the graves of two of the sisters also lie here in a quiet and peaceful burial space.

But it's the high wall and the walled garden and field area directly next door that gets much more attention from visitors like Mary.

Here there stands something very different - something quite shocking.

Along the wall, approximately 12 to 18 inches apart, and well over three feet from the ground, there's a plethora of iron nail spikes protruding from the old walls.

Rusty old nails with old forged vintage square heads on them, remnants from a different age with long chamfering rusty tails, and slowly but surely as Mary asks us to move in and examine them more closely these nails dot their way all the way down the wall - none of them at regular or calculated intervals - all of them travelling down at varying levels - along the brick and stone walls. 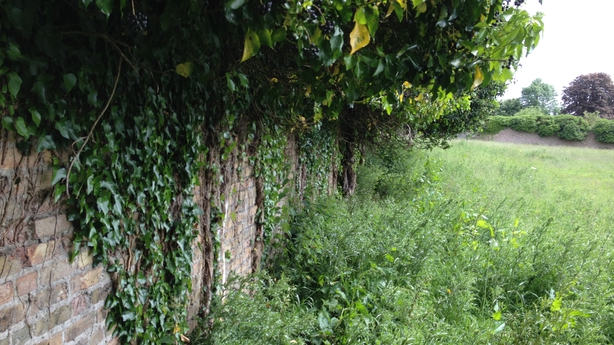 The thistles and nettles having taken over the walled garden next door but there are nail spikes in the walls here too - we are stung and scarred repeatedly by the lofty weeds as we try and pull back the overgrowth from the wall and follow the trail of the nail spikes all the way around the garden.

But on Mary's face today there is a different form of pain intruding.

"The locals tell us that these are the headstones," Mary recalls.

It is said that when a baby was brought her for burial the only mark that remained when the infant went into the ground was the nail spike hammered into the wall along the corresponding section of the brickwork or the stone perimeter in the garden - a sort of marker for the baby - an eerie reminder that this was a human life - coming to such a devastatingly tragic end.

Mary is just thankful that some workman somewhere decided to do this - and pay some respect to those who are buried here.

I circle the garden slowly but methodically looking for more of the nail spikes - and they ARE everywhere in the walls.

At different gaps along the stone work at different heights and varying depths in the wall.

It is hard to imagine why they would be here if they are not marking something. 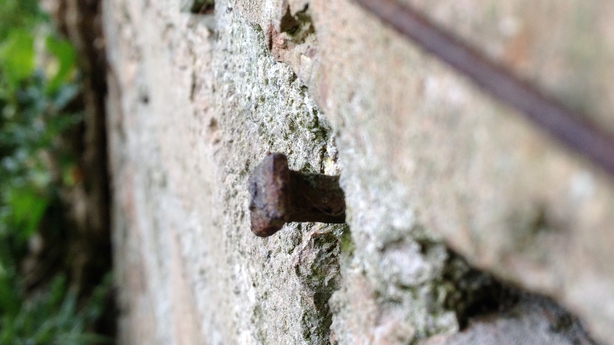 At various points a row of wire also adorns the brickwork - something that could be associated with a gardening plot - a support wire for the growth of flowers or even apple trees or a fruit of some sort but the old nail spikes have no pattern or consistency in where they are separately located.

Some high, some low, some near the rusty gate out of the garden - others now buried in the overgrown ivy.

I give up the counting after 75, each of the nail spikes still protruding, some of them more closely surrounded by others - a cluster of two or three dotted together in places but not in a line at some locations - then perhaps just a single nail spike again for another five yards.

Can we be absolutely certain that these nail spikes are indeed some sort of marker for the burial sites of babies?

In the absence of first hand testimony from either the people who did the burials, those who witnessed it or the nuns who ran this hospital the answer must be no, but Mary Joyce feels certain that she had heard enough from local historians and county councillors who raised the treatment of mothers and babies here in the 1940s and 1950s to feel strongly enough that we need to find out for certain.

She passionately speaks in favour of an independent judicial inquiry and a forensic examination of locations like this.

While the politicians argue and analyse the cost and implications of an inquiry of that nature - she says she will continue her search for her Aunt Carmel.

After 37 years she says her battle has only begun.

She will wait now to see what will emerge from the statutory commission of inquiry - but she is under no illusions - this is only the beginning.

There's a long road ahead - but the journey has now begun.