Finger movement has for the first time been restored to the victim of a paralysing spinal injury using "thought control" technology.

Ian Burkhart, 24, is able to grasp objects, pour and stir drinks, and even play the Guitar Hero computer game using a wearable sleeve that sends electrical impulses to his muscles. 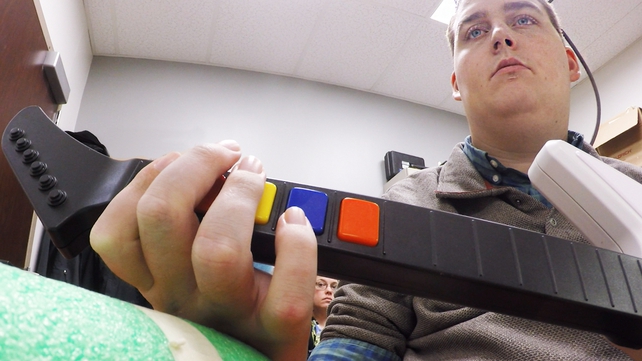 Scientists developed a computer system that can read and decode Mr Burkhart's thoughts and translate them into signals tailored for different hand movements, by-passing his broken spinal cord.

The results of the research, published in the journal Nature, mark a leap forward in neural bypass technology which seeks to transform the lives of people robbed of their independence by devastating spinal injuries.

In years to come it is hoped the technology will become easier to operate, moved out of the laboratory and perhaps even be incorporated into clothing.

It could help patients with a wide range of disabilities, including victims of stroke and traumatic brain damage, say the researchers.

Speaking six years after breaking his neck in a swimming accident, Mr Burkhart, from Dublin, Ohio, said: "I didn't think anything would happen in my life that would set me back and slow me down this much.

"The first time I was able to open and close my hand, it really gave me that sense of hope for the future that I already had in the back of my mind, but it just made it more real.

"Now ... things are moving along even better than I imagined.

"If or when I can use this system outside the clinical setting it will really increase my quality of life and my independence." 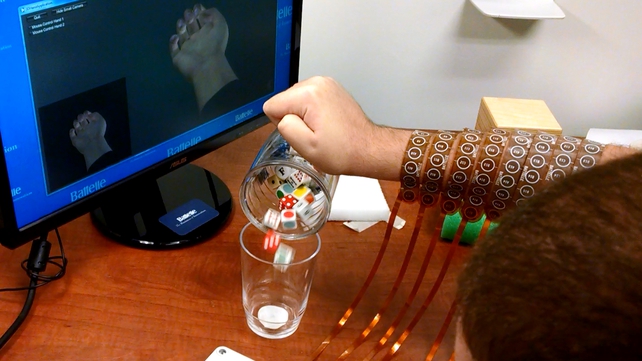 Mr Burkhart was on holiday with friends when he dived into a powerful wave which slammed him into a hidden sand bar.

His spinal cord was snapped at the neck, leaving him a quadriplegic - paralysed in all four limbs.

Although he still has residual movements in his arms, nothing functions below the elbow and he has lost the use of his hands.

Mr Burkhart's injury made him an ideal volunteer for the US scientists who have been pioneering brain-computer interface technology and wanted to attempt the major step of restoring control over the wrist and fingers.

During a three-hour operation in April, 2014, the team implanted a computer chip smaller than a pea into the "hand area" of the motor cortex of his brain.

These are translated into tiny electrical shocks fired into controlling muscles through 130 electrodes embedded in a sleeve worn on the forearm. The electrodes are not surgically implanted, but operate by sending signals through the skin.

Mr Burkhart took 15 months to learn to use the system, which allows him to make isolated finger movements and six different wrist and hand motions. 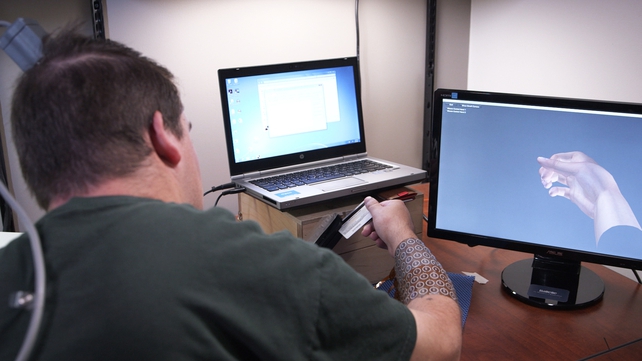 Today he is able to perform tasks that were previously out of the question, including holding a phone to his ear and swiping a credit card.

In the most dramatic test of his abilities, Mr Burkhart played the Guitar Hero video game, which mimics playing a real guitar.

Electrical engineer Nick Annetta, a member of the research team from Battelle Memorial Institute in Columbus, Ohio, said: "It's amazing to see what he's accomplished.

Colleague Chad Bouton, head of neurotechnology and analytics at the Feinstein Institute for Medical Research in Manhasset, New York, said: "This study marks the first time that a person living with paralysis has regained movement by using signals recorded from within the brain."

The research was paving the way to life-changing procedures that could not only help patients with spinal injuries, but also people disabled by strokes or traumatic head injuries, he added.

The fact that Mr Burkhart was able to switch grips and "pinch" his fingers opened up "many new doors" leading to more complex movement.

Mr Bouton said the team was surprised and delighted by the degree of finger control achieved.

"We were not sure that this would be possible," he said. "This really exceeded our expectations."

"Not only were we able to find those signals in the brain for that individual finger movement, but we were able to link those signals to Ian's muscles and allow that kind of movement to be regained."

Currently the technology is confined to the laboratory and involves invasive brain surgery, but the scientists hope to make it far more user-friendly in the future.

Co-author Dr Ali Rezai, director of Ohio State University's Center for Neuromodulation, said: "We're hoping that this technology will evolve into a wireless system connecting brain signals and thoughts to the outside world to improve the function and quality of life for those with disabilities.

"One of our major goals is to make this readily available to be used by patients at home."