Anti-mining campaigners from a number of counties joined forces today to protest at the site of a gold mine a few miles outside Omagh in Tyrone.

The groups say proposed mining at a number of sites on both sides of the border will cause serious environmental damage, a claim that the companies behind the projects reject.

Protesters from Derry, Donegal, Leitrim, Monaghan and Roscommon travelled to the join a protest at the Cavanacaw mine in Tyrone.

It is owned by Canadian company Galantas. A subsidiary, Flintridge Resources, is seeking a prospecting licence to explore mineral deposits at Manorhamilton in Leitrim. 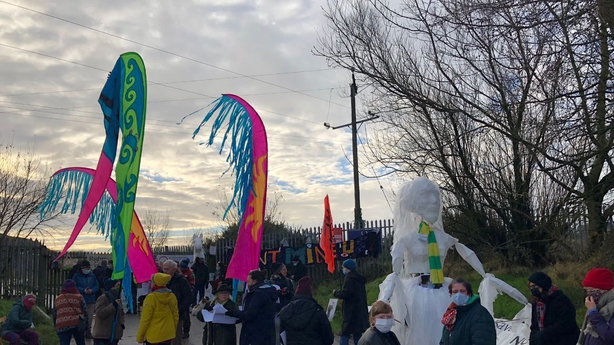 Protesters who've mounted a long-running campaign against the Dalradian Gold Mine in Greencastle in Co Tyrone, which is be the subject of a public inquiry in Northern Ireland, also took part.

The companies behind the controversial projects say they are environmentally safe and will provide a huge boost to local economies, generating hundreds of jobs and generating millions of euro in revenue.

Those opposed to the planned mines insist they would do much more harm than good.

"This protest today is really important because it's a cross-border gathering of people who are opposed to gold mining on the island of Ireland," says Fidelma O’Kane of the Save Our Sperrins group, which is campaigning against the Dalradian mine.

"We are here to show the people of Leitrim and other places where mining is planned that we stand with them.

"I think it's about time that they (the mining companies) listen to us. If the local people don't want it, how can a foreign company come into our country and impose themselves against the will of the people to extract the resources of Ireland for profit, you know, it's unbelievable that that would be allowed by our governments, north or south."

Many people in the area have expressed support for the mine, saying it will bring much needed jobs and investment to the area. 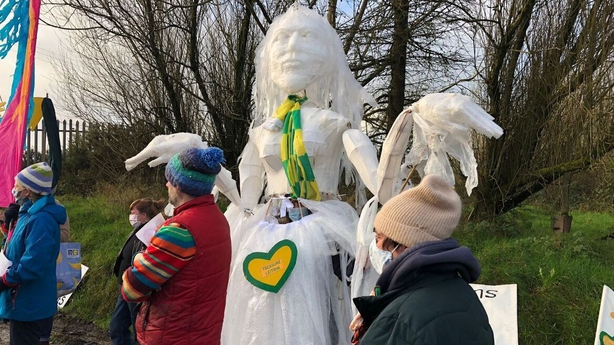 Members of the recently formed Treasure Leitrim group opposed to proposed mining at Manorhamilton were among those who took part in today’s protest.

"We’re here to show solidarity with communities across the island of Ireland and across the world that are fighting against the extractive, carbon heavy mining industry," says spokesman Jamie Murphy.

"In particular, from our perspective, we're calling on Eamon Ryan not to grant a prospecting licence to the company Galantas or Flintridge Resources.

"So we've come here directly today to Galantis to give that message loud and clear, that they have no mandate from the community to proceed with their plans to mine in Co Leitrim."

Despite signs warning against entry, protesters said they found the gate to the site open and a number went through to observe work that’s been done.