Two men have been remanded in custody over their failure to comply with High Court orders to stay away from a Co Roscommon farm, which was the scene of a controversial eviction in 2018.

Ms Justice Leonie Reynolds heard that both Michael Anthony McGann, who owns the property, and retired Garda Kevin Taylor, of Dublin Road, Longford, were in contempt of orders requiring them to vacate the property at Falsk, Strokestown, Co Roscommon.

Both men were arrested - Mr Taylor at his home in Longford, and Mr McGann at the property - this morning by gardaí before being brought to the High Court.

Remanding them in custody to Cloverhill Prison in Dublin, the judge, who urged both men to get legal advice, said she will decide what to do with them tomorrow.

The matter has going on for some time, requiring the use of "valuable garda resources," the judge said.

The court wanted to bring some finality to things, and would deal with the contempt proceedings via video link tomorrow.

KBC Bank, which previously obtained an injunction granting it vacant possession of the farm, said the men had refused to comply with court orders directing them to leave the property.

Keith Rooney, counsel for KBC, said that despite giving an undertaking to the court to vacate the property, Mr McGann had, in fact, returned and made statements on social media that he would not leave the property.

Counsel said he was in "flagrant breach of court orders".

Mr Taylor had been present on the farm and been made aware of the court's orders to vacate it, counsel told the judge. He was part of "a coordinated attempt to frustrate the orders of the court".

In reply, Mr McGann said he believed that the original injunction obtained by KBC last year was based on fraud which he said he could prove.

He said he had provided the court with that evidence and alleged there was "a cover up". He also told the judge he would not be taking legal advice on the matter, adding the undertaking had been given under duress.

Ms Justice Reynolds said the "ship had sailed" in regards to challenging the original order requiring the property to be vacated.

She said Mr McGann had, after obtaining legal advice, given an undertaking last month to vacate the property.

That undertaking had been breached, which the judge said was a very serious matter. 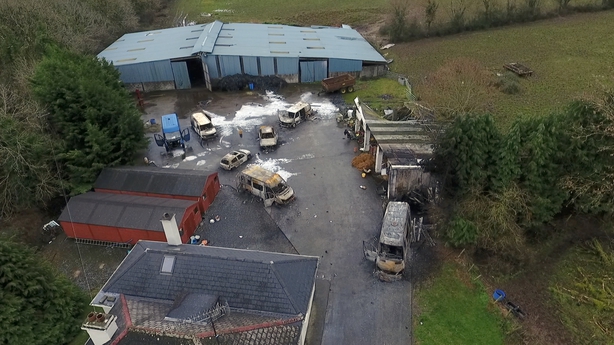 Mr Taylor also asked if there was "any man in court" who could say he had done anything wrong. He then attempted to leave the courtroom, but was prevented from doing so by gardaí.

Ms Justice Reynolds, who criticised Mr Taylor for not wearing a face mask in court, told him that "you are all the same person".

She remanded him in prison overnight and urged him to seek legal advice.

The farm at the centre of the long-running action has been the subject of proceedings involving siblings Michael Anthony, David, and Geraldine McGann, and KBC Bank, which secured orders allowing it to repossess the property.

In October, the siblings were brought before the court, following their arrest, over their failure to leave the property.

They were released after giving undertakings to leave and remove their livestock from the farm.

However, KBC returned to court claiming it was unable to secure possession of the property due to the presence of several individuals on the farm.

KBC obtained an order for possession of the farm several years ago arising out of a €431,000 debt on the property from a loan to its registered owner Michael Anthony McGann.

The McGanns were evicted in 2018, but the house was later the scene of an attack on security men employed to secure it.

The security men were forced off the property by a group of masked men and a number of vehicles were burnt.

The McGanns, who were not involved in the incidents, returned to the house. That resulted in KBC seeking, and obtaining, an injunction against them last March.