President Michael D Higgins has sent TDs and Senators a signed St Patrick’s Day card in what is being viewed in Leinster House as a strong hint that he intends running for a second term.

The card wishes the politicians a Happy St Patrick’s Day and is signed "Michael D Higgins, Sabina and family."

The front of the specially designed card features a picture of a sculpture by Rachel Joynt that sits on the grounds of Áras an Uachtaráin.

The sculpture is called "Dearcán na nDaoine" or "The People’s Acorn".

It is described inside as a permanent tribute to the men and women whose effort and sacrifice contributed so much to Irish freedom. 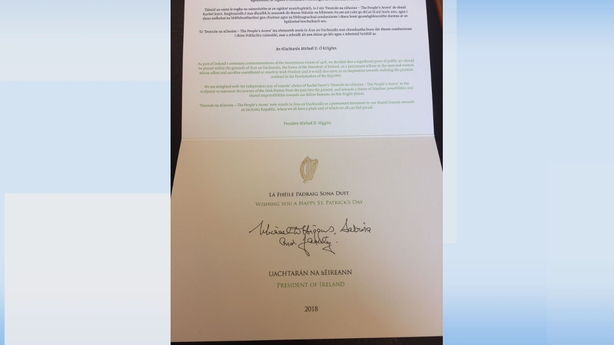 The back of the card has a diagram outlining the UN’s sustainable development goals including gender equality, climate action and quality education.

Several TDs and Senators said this is the first time they can remember receiving a St Patrick’s Day card from the President.

The timing is being viewed as significant with President Higgins set to announce by the summer whether or not he intends to seek a second term in the office that he was elected to in 2011.

A presidential election is scheduled to take place in November this year unless President Higgins is elected unopposed as was the case with Mary McAleese in 2004. 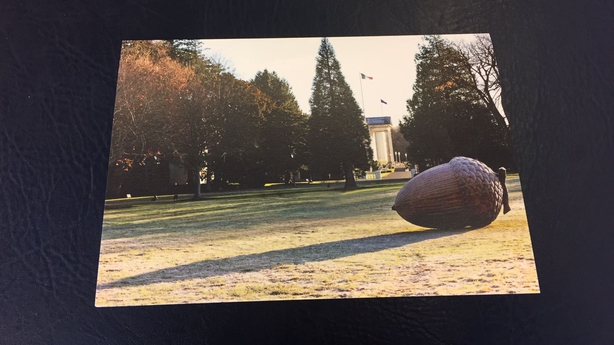 One Senator, Gerard Craughwell, who has vowed to force the holding of a presidential election described President Higgins’ card as "unusual but not unexpected."

Senator Craughwell said he would continue to try to ensure there was an election this year.

Potential candidates need to be nominated by 20 members of the Oireachtas or get the backing of at least four county or city councils.

The sitting President may nominate themselves to contest the election.