DUP leader Jeffrey Donaldson has said he is confident his party will win the Stormont election despite an opinion poll putting his party six percentage points behind Sinn Féin.

If the results are reflected by votes cast at the ballot box next week, it will be the first time that a nationalist party is the largest at Stormont.

That would allow Sinn Féin to nominate the next First Minister, likely to be their vice president Michelle O'Neill.

Support for Sinn Féin is now at 26% with the DUP on 20%, according to the latest the LucidTalk poll commissioned by the Belfast Telegraph.

Mr Donaldson said that he believes the DUP is going to win this election.

"I think the polls are not reflective of what I find on the doors in Northern Ireland," he said.

"As we're going around, there is strong support for the DUP, most unionists recognise the DUP is the only unionist party that can win, they don't want to see Sinn Féin winning and taking forward their divisive border poll agenda." 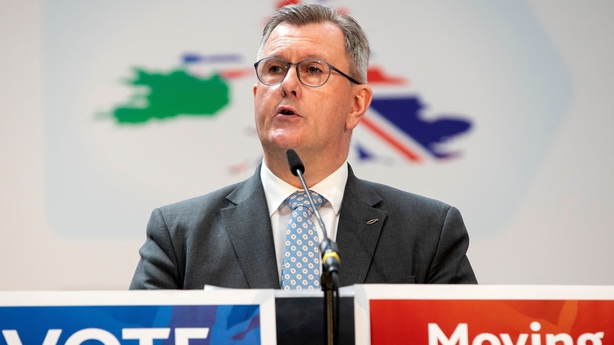 Mr Donaldson added that "most unionists recognise there is a clear choice" in this election.

"It's the DUP's five-point plan or Sinn Féin's divisive border poll plan and I think on 5 May, we're going to see unionists voting for the DUP and transferring their votes to other unionist parties because, not only do I want the DUP to win, I want to see unionism win more seats as well and that's entirely possible in a number of constituencies," the party leader said.

"I'm not bothered by polls and I think the political pundits who stake their reputation on the results of polls might get a surprise on 5 May."

The poll was carried out online between 22 to 24 April using its established online opinion panel, comprising of 13,816 members, which it states is balanced to be demographically representative of Northern Ireland.

The latest poll results were based on 3,699 full responses which were authenticated, audited and weighted to a NI-representative data-set of 1,708 responses which was used for analysis in terms of the final results.

Lucidtalk say all results are accurate in terms of being Northern Ireland representative to within an error of plus or minus 2.3% at 95% confidence.