The newly-discovered colony brings the total number of known emperor penguin breeding sites around the coastline of Antarctica to 66, the British Antarctic Survey (BAS) said.

The site, identified by penguin guano – or poo – stains which are brown and easy to spot against the snow and rock, is at Verleger Point, West Antarctica, and has around 500 birds.

The scientists studied images from the European Commission's Copernicus Sentinel-2 satellite mission which were compared to and confirmed by high resolution images from the MAXAR WorldView3 satellite.

Dr Peter Fretwell, lead author of the research that made the find, said that while it was "exciting", the colony is small and in a region badly affected by recent sea ice loss.

Emperor penguins, which are the biggest of the 18 penguin species and stand around 1.2m tall, need sea ice to breed.

They are found in areas that are very hard to study because they are remote, inaccessible and very cold, with temperatures dropping to as low as minus 60C, the scientists said. 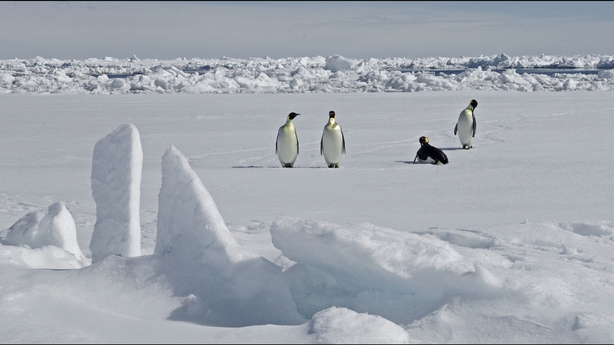 So for the last 15 years, BAS researchers have been looking for new colonies by searching satellite images for penguin guano.

Half of the known colonies have been discovered by satellite imagery, the scientists said.

Dr Fretwell, who studies wildlife from space at BAS, said: "This is an exciting discovery. The new satellite images of Antarctica’s coastline have enabled us to find many new colonies.

"And whilst this is good news, like many of the recently discovered sites, this colony is small and in a region badly affected by recent sea ice loss."

Emperor penguins are vulnerable to the loss of sea ice, which is set to decline as the climate changes.

Recent projections suggest that under current warming trends, 80% of colonies will be quasi-extinct by the end of the century, BAS warned.

The research was funded by science funding body UKRI-NERC as part of the Wildlife from Space project with a contribution from conservation charity WWF.