Greece has welcomed Italy's return of a marble fragment from the Parthenon, calling on the British Museum to open talks on returning those parts of the archaeological monument it still holds.

The Greek culture ministry said the 2,500-year-old fragment had been returned from a museum in Sicily as "a deposit, not a loan" and would remain in the Greek capital for the next eight years.

Prime Minister Kyriakos Mitsotakis said that two "very important exhibits" would be sent to the Antonino Salinas Museum in Palermo in recognition of the gesture.

And he welcomed its arrival as a "very important step" towards Greece's ultimate goal - the return of a large collection of Parthenon sculptures held by the British Museum.

"I think it paves the way also for the British Museum to enter into serious discussions with the Greek authorities, to find a solution that will be mutually acceptable," Mr Mitsotakis said at the Acropolis Museum, which has housed the Parthenon sculptures since 2009.

"When there is a will, there is a way... sooner or later it will happen," he added, citing favourable opinion polls in the UK.

The fragment - a foot and lower tunic from a sculpture thought to depict the huntress goddess Artemis - was returned following an agreement between the museum and the Greek culture ministry. 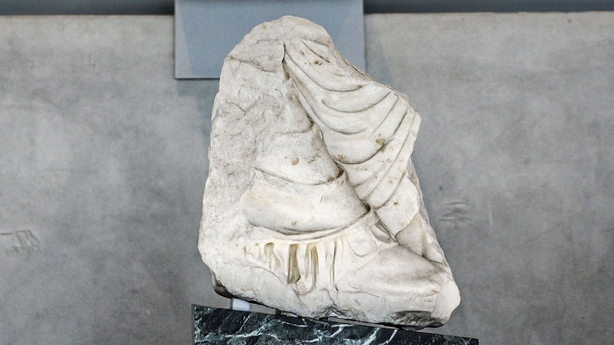 It was in the collection of Robert Fagan, a 19th-century British consul to Sicily and Malta before the museum acquired it in 1836, the Greek PM's office said.

The Parthenon temple was built in the 5th century BCE on the Acropolis to honour Athena, the patron goddess of Athens.

After a Venetian bombardment partially destroyed it in 1687, workmen stripped entire friezes from the monument on the orders of Scottish nobleman Thomas Bruce, known as Lord Elgin, in the early 1800s.

Elgin sold the marbles to the British government, which in 1817 passed them on to the British Museum where they remain one of its most prized exhibits.

London has long argued that the sculptures had been taken with permission from the Ottoman Turks who ruled Greece at the time, but Athens insists they were stolen.

In an interview in March, British Prime Minister Boris Johnson ruled out the return of the marbles to Greece. They had been legally acquired by Britain and legally owned by the British Museum's Trustees since their acquisition, he said.

After a meeting with Mr Mitsotakis in November, Mr Johnson reiterated that the issue must be resolved by the trustees of the British Museum, not the British government.

Athens, which has received backing from a groundswell of celebrities on the issue, has repeatedly said it does not wish to pursue legal action to settle the bitter dispute.

It has called for the United Nations cultural agency UNESCO to act as mediator, an offer rejected by the British Museum.

Smaller Parthenon frieze collections and fragments are also in the Louvre and museums in Copenhagen, Munich, the Vatican, Vienna and Wurzburg.