A mobile library bus rolled in to a Kabul orphanage today and opened its doors for the first time since the Taliban's return to power in Afghanistan, eliciting beaming smiles from children.

"I'm really feeling happy. I'm studying the books I love again," says 11-year-old Arezo Azizi, whose favourite tome is a counting aid about a cat who gets more pieces of cheese the higher it can count.

The library "didn't come for three months, until now," she explains, sitting on a converted public bus, her voice rising above the excited chatter of her peers.

The mobile library is one of five buses leased by a local organisation called Charmaghz, established by Freshta Karim, an Afghan graduate from Oxford University.

Hundreds of children have in recent years made use of the mobile libraries daily as they criss-crossed Kabul, as many schools lack their own library.

But "we lost almost all of our sponsors after the government was taken (over) by the Taliban" in-mid August, says Ahmad Fahim Barakati, deputy head of the non-profit initiative. 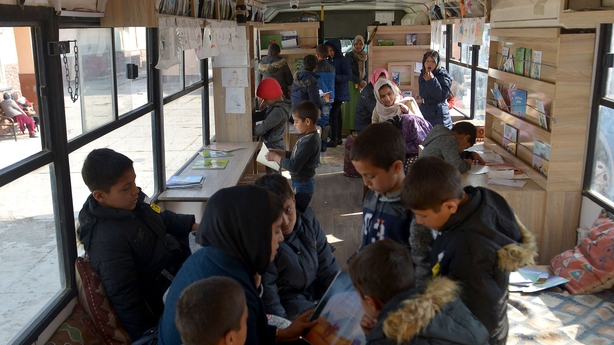 The Taliban's education ministry granted permission for the mobile libraries to restart several weeks ago. But it was only a few days ago that agreement was reached with the transport ministry, which owns the buses, Barakati explained.

Like the children, librarian Ramzia Abdi Khail, 22, is visibly happy that the show is back on the road.

"It's a lovely feeling. Currently, the schools are also closed," she notes.

Girls' education has been hit particularly hard by the Taliban's return to power, as millions of girls across the country have been barred from secondary education in state schools.

"We have street kids and I love to serve them because they do not have the opportunity to go to school, and this is a way that I can serve them," adds Khail.

"We have Islamic books, we have English and Dari storybooks ... we have painting books, different game books."

Charmaghz has enough funds at present to keep the mobile libraries on the road for a month or so, Barakati says.

"We are raising funds through online platforms and globally and I hope we have enough sponsors and donators" to keeping going beyond then, he says.