A first giant sheet of fabric has been draped down the Arc de Triomphe in Paris as work starts on wrapping the monument in a tribute to late artist Christo.

After weeks of preparations, the final stage of the art installation has begun, with a silver-blue sheet unfurled from the top of the imposing war memorial at the top of the Champs-Elysees.

Over the next few days, the entire Arc will be wrapped in fabric - the signature of Bulgarian-born Christo who died last year.

He had dreamed of sheathing the monument since renting a nearby apartment in the 1960s.

But despite completing other major public works during his lifetime, including wrapping the oldest bridge in Paris in 1985 and the German parliament in 1995, the Arc de Triomphe project never materialised before his death.

The completion of his vision - and that of his co-designer and wife, Jeanne-Claude - has been overseen by his nephew Vladimir Javacheff in coordination with the Pompidou museum and French authorities.

More than 25,000 square metres (270,000 square feet) of fabric will encase the monument over the coming days, with an official ceremony due to be held on Thursday and completion on Saturday.

The spectacular wrapping will then stay in place until 3 October. 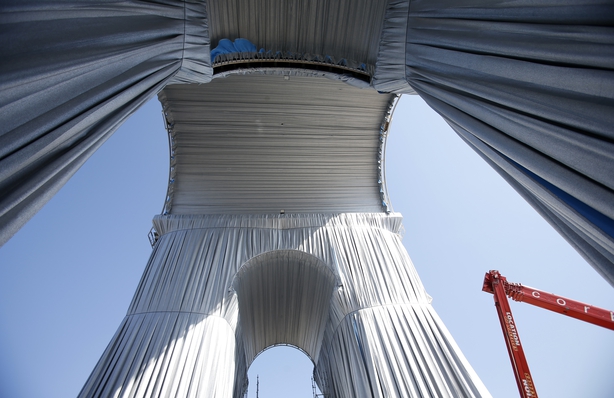 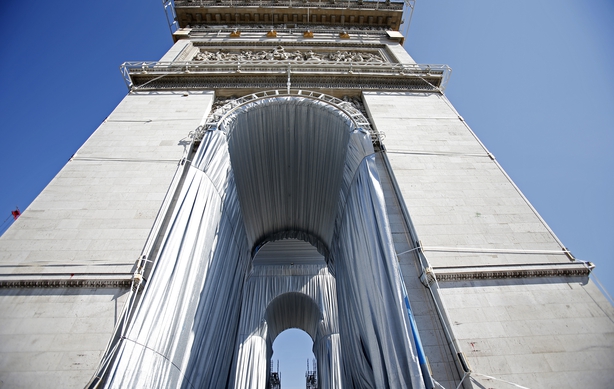 "It will be like a living object stimulated by the wind and reflecting the light. The folds will move and the monument's surface will become sensual," Christo once said of his idea, for which he left sketches and photo montages.

"People are going to want to touch the Arc de Triomphe," he said.

Workers have been busy for weeks putting scaffolding and protective equipment in place to protect the stonework and sculptures.

The monument, which was built by Napoleon to commemorate fallen soldiers during his military campaigns, has been recently restored after being defaced by anti-government "yellow vest" rioters in December 2018.

As well as the polypropylene fabric, the project will use 3,000 metres of red rope, all of which can be recycled.

Born on 13 June 1935 in Bulgaria, Christo left his home in 1957, living in several countries before arriving in Paris, where he met his future wife Jeanne-Claude.

He died of natural causes at his home in New York in May last year.

The Arc de Triomphe, with the flame at the tomb of the unknown soldier still alight, will be accessible throughout the 16-day exhibition.