A 97-year-old former US soldier has been reunited with three Italian siblings he saved as children during WWII.

Martin Adler travelled to Bologna in northern Italy to meet Bruno, Mafalda and Giuliana Naldi, who are now in their 80s.

Mr Adler was photographed with the children after almost killing them near Bologna in 1944, with the image being used to track them down more than 75 years later.

The veteran greeted the Naldis warmly from his wheelchair as he arrived, bringing them chocolate and a rose. He was wearing a t-shirt saying 'Martin's bambini, forever kids'.

The former soldier managed to make contact with the three siblings after a successful search via social media last year.

Mr Adler, a native of the Bronx, entered a house in Monterenzio, near Bologna, with a companion of the 339th Infantry Regiment during the Italian campaign in October 1944.

Once inside they heard sounds coming from a basket and they were ready to shoot as they thought German soldiers were hiding there.

But the mother rushed in shouting 'bambini, bambini!' before they could open fire.

When he saw three small children, two girls and a boy, Mr Adler said his heart melted and he asked the mother if he could take a photo with them.

"The mother, Mamma, came out and stood right in front of my gun to stop me (from) shooting," Mr Adler recalled to US media.

"That was a real hero, the mother, not me. The mother was a real hero. Can you imagine you standing yourself in front of a gun and screaming ‘Children! No!?". 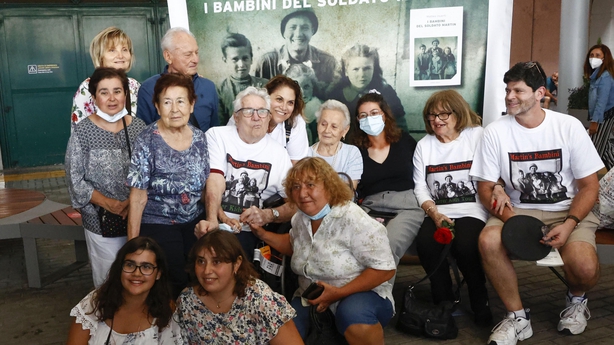 After 76 years, he decided to try to track them down, although it was not an easy task, given that he did not know their names or that of the town.

But his daughter Rachelle Donley made an appeal via social media and, with the help of Italian writer Matteo Incerti, the mission was completed.

As a result, Mr Adler was able to have a video call last December with Bruno, Mafalda and Giuliana, who are now 84, 83 and 80 respectively.

"I am so happy and so proud of him. Because things could have been so different in just a second. Because he hesitated, there have been generations of people," his daughter told US media.

ABC News reported that Mr Adler will also visit Florence, Naples and Rome, where he hopes to meet Pope Francis.