A leopard remains at large in eastern China after escaping from a safari park with two of its fellow big cats, prompting fierce public criticism of the wildlife attraction over the safety lapse and for brutally hunting down the escapees with packs of dogs.

Residents of the city of Hangzhou first reported seeing leopard sightings in local tea plantations late last week, but the Hangzhou Safari Park only acknowledged the outbreak after the news went viral.

The park has said the cats were not fully grown and that it delayed making a public statement to avoid causing panic, but it faces accusations that keeping quiet recklessly endangered residents.

Local officials said five people associated with the park - including its general manager - had been detained and that police had launched an investigation into the incident.

Chinese media reported that a search team was on the trail of the third leopard after fresh paw prints were found yesterday, in an effort that included a spotter hovering over the plantations in a powered parachute. 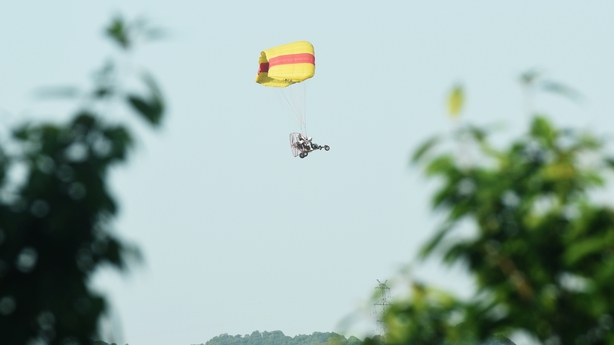 Some of the fiercest criticism was sparked by videos of the recapture of at least one of the cats - looking nearly full-grown - showing a pack of at least five dogs mauling the leopard as it clawed desperately at them.

Video from a Chinese state-run television outlet released over the weekend also appears to show one of the recaptured leopards resting in an enclosure with one of its hind feet missing.

The stump appeared freshly wounded and was unbandaged.

The safari park has not yet commented on the videos.

"What did these young leopards do wrong to have to suffer the consequences of such serious mismanagement, and to be tracked and mauled by a search team with vicious dogs?" asked one of a string of angry posts accompanying the clip on China's Twitter-like Weibo.

"Is this how we look after our nationally protected animals?"

Leopards, which still exist in isolated pockets in the wild in China, are a protected species under Chinese law, with strict bans on hunting or trafficking in leopard-derived products.

Chinese state media reported in 2017 that a tiger killed a visitor to a wildlife park in the eastern city of Ningbo after the man apparently entered its enclosure, and tigers at a Beijing park killed one woman and injured another the previous year after the pair left their vehicle.

The Hangzhou park has been temporarily closed.