A floating scarecrow with googly eyes could help reduce the number of seabirds caught in fishing nets, researchers have said.

The "looming-eyes buoy" with big eye spots and a looming movement can create a visual deterrent close to gillnets, a curtain of netting that hangs in the water, to prevent birds diving into them, getting entangled and drowning.

A group of scientists, including from Birdlife International and the RSPB's Centre for Conservation Science in the UK, worked with marine engineers to develop the device, which was then tested on long-tailed ducks in Estonian waters.

The trial, which clocked up 250 hours of observation and counts of 10,000 birds, found the number of birds were reduced by 20-30% within a 50 metre (164 ft) radius of the floating scarecrow, compared to traditional fishing buoys. 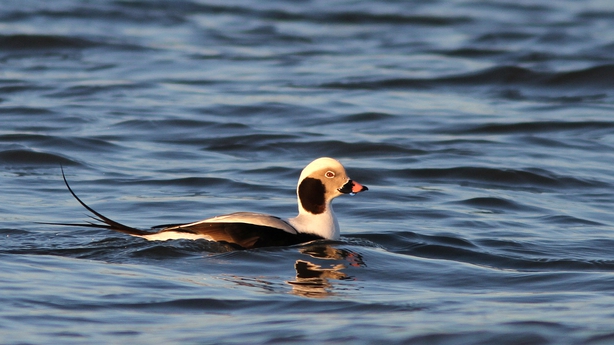 The scientists, who published their findings in the journal Royal Society Open Science, said the birds came back to the area after the buoy had been removed, showing they were not permanently deterred from the spot.

The device could help tackle the issue of bycatch, in which an estimated 400,000 seabirds are caught and drowned in gillnet fisheries around the world each year, with species such as black guillemots, long-tailed ducks and velvet scoters at risk.

Yann Rouxel, lead author of the study, and bycatch project officer at the BirdLife International marine programme, said: "Unfortunately seabirds can drown if caught up in the nets.

"We thought if we can reduce the chances of seabirds from diving too close to gillnets, we could prevent deadly interactions from happening.

"The development of low-cost devices such as the looming-eyed buoy offers up simple, yet innovative, solutions to these conservation problems and so that everybody benefits.

"The next step is for us to test the device in gillnet fisheries to ensure that seabird bycatch is reduced."

The researchers said the buoy could provide a low-cost solution that would be more likely to be accepted by the fishing industry than measures such as fisheries closures or changing from gillnets which would have a major impact on them.

It will now be tested in the Icelandic lumpfish fishery later this year, to see if it can significantly reduce bycatch and, if proved to be successful, it could save thousands of seabirds a year, the scientists said.