It was Harlock's first day at coronavirus training school and she already showed promise.

The one-year-old German Shepherd's task this morning was simply to place her slightly wet nose on a black tube.

"Sniff," encouraged her trainer, Massimiliano Macera, who was quick to reward his furry student with treats whenever nose met tube.

"She's already got it!" he added, smiling at his protégé, part of a team of dogs learning how to sniff out Covid-19.

The project, which began ten days ago at Rome's Campus Bio-Medico University Hospital, involves training dogs to detect the presence of coronavirus in human sweat. 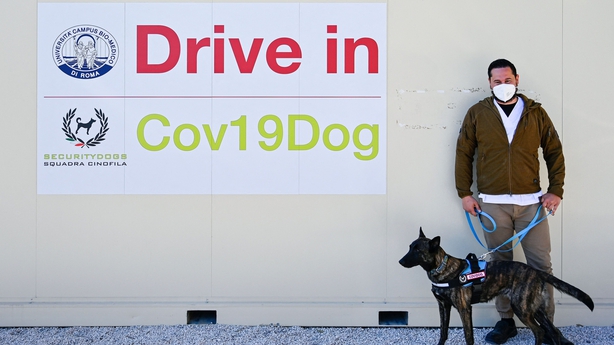 If found to be reliable, it could prove a faster and cheaper method of detection in crowd situations, whether a football match or rock concert, say those working on the project.

"If we have 1,000 people we have to screen with an antigen swab, it would take us about 20 minutes for each person," said Massimo Ciccozzi, a professor of epidemiology at the university.

"A dog, using their olfactory senses, would take 30 seconds maximum."

Dogs, with their sensitive noses packed with receptors, are increasingly being used to detect human diseases, including cancer, diabetes or Parkinson's.

Since the coronavirus pandemic hit, researchers in countries around the world including Finland, Germany, France and the United Arab Emirates have launched sniffer dog trials.

But some scientists believe such testing has not yet been widely adopted by authorities in part because of a lack of peer-reviewed literature.

Mr Macera's company SecurityDogs has six pups in the programme, among them Roma.

The four-year-old Dutch Shepherd was outfitted in her uniform, a turquoise and black harness proclaiming the dog's Covid-fighting role.

"The first part of the dog training is getting them to recognise the volatile organic compounds that characterise the Covid disease," said Silvia Angeletti, the hospital's lab director.

She called the study the first based on collaboration between laboratory research and field experimentation.

For now during the training phase, biological samples come from patients with coronavirus inside the hospital.

After the dogs can reliably recognise the disease, the project will focus on patients at a drive-through testing centre on the campus.

Those willing to participate will turn over a gauze sample of their sweat, which will be placed inside a metal receptacle inside the testing room to be sniffed by the dogs. 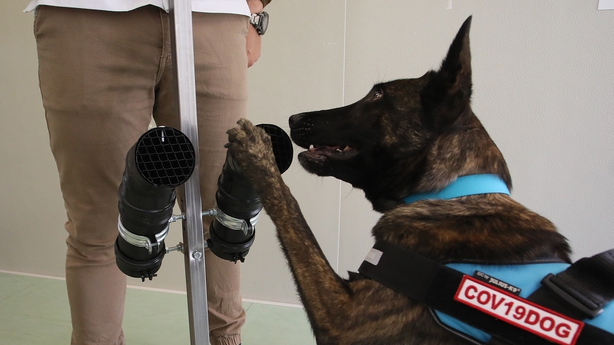 The results will be compared with those of a molecular nasal swab performed on each patient.

For now, Harlock the German Shepherd is just having fun inside the small makeshift testing room, blissfully unaware of the potential importance of her work and that of her four-legged colleagues.

"They can't wait to come in the morning," Mr Macera said of his dogs.

"Their work is play. These guys are already experts, they do it with a certain naturalness and the youngest ones are starting."