Hairdressers in Latvia are taking the unusual step of offering their services in snowy forests or on frozen lakes to protest against Covid restrictions.

"We cannot work otherwise," hairdresser Diana Silina told AFP as she prepared her equipment on the icy surface of a lake outside the capital Riga.

Hairdressing and spa salons have been closed in Latvia since 21 December and outdoor contacts are limited to a maximum two people - so hairdressers are only taking one client at a time.

"We don't know whether even this way is fully legal, but we must try, otherwise we have no income at all," Silina said.

The hairdresser said her boyfriend was supporting her financially and did not want her to risk a €500 fine.

A supporter of the initiative, Riga city councillor Ieva Brante, has also posted a video of herself having her hair done in the middle of a forest where she said there would be no police patrols.

"Being a lawyer, I support people finding legal ways around regulations, if that allows them to work and earn their living," she said on Facebook.

Brante told AFP that she was later contacted by the police but had not received a fine.

During a government meeting, Health Minister Daniels Pavluts also reportedly signalled his tacit support, saying: "Getting your hair done in the forest is absolutely OK!"

Two professional associations of beauticians and hairdressers meanwhile are threating to sue the government in the Constitutional Court if their work is not allowed to resume in some form.

"The decision to ban our services was taken without consulting us and without statistics which would show that hairdressing spreads Covid-19," the associations' leaders Sabine Ulberte and Renate Reinsone wrote in a statement. 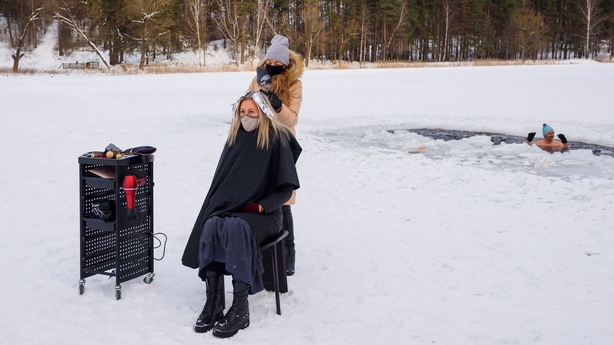 Their move follows a similar lawsuit launched by Book Publishers Association which led to the reopening of bookshops in Latvia earlier this week, after no proof was found to link in-person visits to bookshops with coronavirus infections.

The Latvian parliament will hold a special session on the issue after 10,000 signatures were collected for a petition to allow hairdressers and other beauty professionals to resume work.