With a wagging tail, an Indian street dog that lost its front legs in train accident headed off today for a new life in the English countryside.

The three-year-old mutt was found "covered in blood" and badly injured after being run over by a train at Faridabad in the northern Indian state of Haryana last October.

A railways constable took the wounded female to a local shelter that looks after some of the thousands of stray dogs, cows and monkeys maimed on India's treacherous railways and roads every year.

"It is almost impossible to save such a badly injured dog," veterinarian Mahesh Verma said in a graphic video shared by the People for Animals Trust that named the pooch Rocky.

"There was a lot of bleeding... we arranged a healthy dog and transfused blood."

Vets had to amputate the forelegs, leaving the dog with stumps. Her back legs were also badly injured. 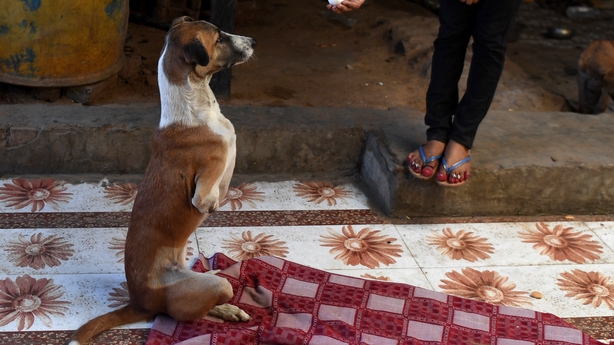 But the dog - although not named after Sylvester Stallone's 'Rocky' - nevertheless battled as hard as the underdog boxer to recover, using her chin for balance as she hobbled about.

The rescue organisation's video about her plight went viral, attracting the attention of the global dog rescue group Wild at Heart Foundation.

They found her a home in the rural Cotswolds region of south-west England, while an Indian person living in London paid for new artificial legs.

In July Rocky took her first steps on her new limbs, made by a leading doctor in Jaipur, and over several months gradually learned to walk again. 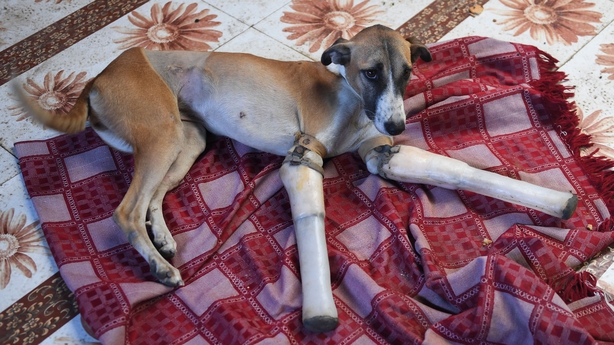 'We miss her already'

Rocky boarded a plane in New Delhi early this morning bound for London, where she is due to be collected by the foundation and her new owner.

She appeared to be taking everything in her shaky stride.

"She has always been fond of travelling, so I don't think she realised she was going away from us. She was happy, wagging her tail as we said goodbye," Ravi Dubey from the People for Animals Trust told AFP.

"We miss her already. Everyone is looking at the stories published about her yesterday and watching her old videos and photos. We are at the shelter home right now and not seeing her in her usual spot is heartbreaking."

"In India, pets are often abandoned and abused. We are very happy that Rocky will have a safe and open space," said Dubey.

"She made it," Dubey said, hailing the animal's "incredible resilience, strength and spirit to live".