Unable to use her hands, arms, or legs, Afghan artist Robaba Mohammadi has defied unlikely odds in a country that routinely discriminates against women and people with disabilities.

Denied access to school, as a child she taught herself to paint by holding a brush in her mouth, clenching it between her teeth to create elaborate and colourful portraits.

Today, the 19-year-old's works sell and exhibit internationally, and she is so accomplished that she has launched a dedicated centre to help train other artists with disabilities.

Some 50 students attend classes at her centre in Kabul, which she opened last year and funds herself with money from selling her paintings.

According to a 2015 national survey, about 1.5 million of Afghanistan's approximately 35 million population has some form of disability, including tens of thousands of people suffering from landmine injuries.

But despite this, the impoverished country still stigmatises those that are not able-bodied.

Ms Mohammadi was born with a permanent physical disability that means she cannot use her limbs, and now suffers from a degenerative condition called arthrosis.

"Because of my disability, I was never even able to go to school," she said, adding that she had looked on enviously as her siblings went to get an education.

But with the help of her family, she eventually taught herself to read and write, and can now use social media on her mobile phone as adeptly as any other teenager - by typing with her tongue.

"We are so proud of Robaba, she is an inspiration for other disabled people," said her brother, 24-year-old Ali Mohammadi, who hopes to create a literacy course for people with disabilities who have been unable to go to school. 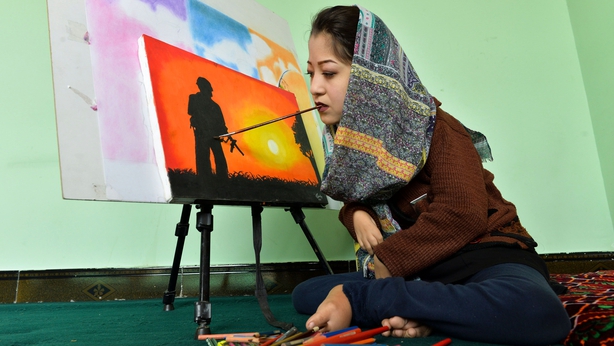 Ultra-conservative Afghanistan, long considered one of the world's worst places to be a woman, still often forces women with disabilities to stay hidden away, even in the comparatively progressive capital Kabul.

"I was feeling tired and sick of not being able to leave home," Ms Mohammadi said.

"I felt really upset. When our relatives would visit, they would whisper that my parents committed some kind of sin that they delivered a disabled girl."

Benafsha Yaqoobi, commissioner at the Afghan Independent Human Rights Commission, said such treatment was because there was often double the prejudice, "due to womanhood and due to disabilities".

Noor Ahmad Azizi, a 22-year-old student at Ms Mohammadi's painting centre, said he had been unable to attend school because of his disability.

"I love to do painting," Azizi said. "I would love to learn to paint professionally, and I also want to become famous like Robaba."

Ziaul Haq Fazli, a spokesman for the Afghan ministry for martyrs and disabled people, said more than 320,000 people with disabilities and relatives of those killed in the war were registered with the ministry, which helps provide jobs and educational opportunities.

For Ms Mohammadi, art was a way to release her frustration.

She first started drawing by holding a pencil loosely in her mouth, but then realised she could improve details in her sketches by clenching the pencil between her teeth.

"It was very difficult and I cried several times," she explained as she coloured a vibrant scene featuring a large tree.

"It was hard to do the lighting and shading of the paintings, then my dad encouraged me," she added.