Ms Merkel became a rare foreign leader to speak out on India's smog crisis after being exposed to the capital's air yesterday, when authorities said the pollution had reached "emergency" levels.

Schools were ordered closed until Tuesday and all construction halted, while Delhi authorities started distributing millions of anti-pollution masks to children. 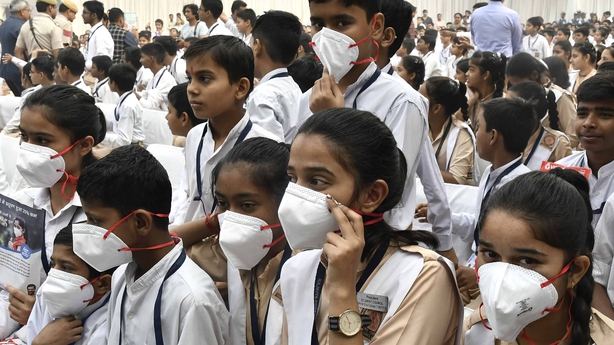 The same day, Ms Merkel went on a ceremonial parade in the city with Prime Minister Narendra Modi as the smog intensified.

Neither leader wore masks despite authorities telling residents to stay indoors to avoid the haze.

Ms Merkel said that Germany would spend one billion euro on "green" urban transport projects in India over the next five years, including €200 million to replace diesel buses in Tamil Nadu state.

"These diesel buses are to be replaced by electric buses and anyone who saw the pollution in Delhi yesterday would find very good arguments for replacing even more of these buses," Ms Merkel said in the widely reported speech.

Much of the new peak in the most dangerous PM 2.5 pollutants - particulates smaller than 2.5 microns that get into the lungs and bloodstream - has been blamed on fires lit by farmers to burn off wheat crop residues outside of the capital.

The city will be under a new spotlight tomorrow when India play Bangladesh in a cricket international.

The two teams have insisted they will go ahead with the match despite the pollution threat.

Some Bangladesh players and bowling coach Daniel Vettori trained in masks at the Arun Jaitley stadium, where the Twenty20 match is to be played.

Authorities have ordered trees in and around the stadium to be sprayed with water to collect dust.

They have also set up special patrols to stop construction work and rubbish burning.

Bangladesh captain Mahmudullah Riyad said the team had spoken about the pollution dangers but there was little they could do.

"When we came here there was smog, we all know, but the players have practiced for last three days, trying to adapt to the conditions." he said.

"It's not within our control, we have to focus on our cricket."

Delhi has faced a mounting pollution crisis over the past decade.

Fourteen Indian cities including the capital are among the world's top 15 most polluted cities, according to the United Nations.

According to one study, smog kills a million Indians prematurely every year.