Diners are unable to eat in the Penny Dinners soup kitchen in Cork this year, but the "The Little Miracle on Hanover Street" will see off the challenge of Covid-19 with the charity still hoping to feed 700 people.

The powerhouse behind Penny Dinners, Caitriona Twomey, will run a Christmas dinner service from outside the soup kitchen while meals will also be delivered to those in need throughout Cork city and county.

The food has been donated by the nearby River Lee Hotel with turkey, ham and all the trimmings on offer.

The High Hopes choir will be singing alongside Hank Wedel and a Christmas tree has been moved onto the street.

Ms Twomey says that the support of the people of Cork and further afield is "absolutely astounding."

"It is what keeps us going so we are in a position to help others," she said.

"It is a tough time all around. Demand is ferocious. People in the hospitality and taxi trades, etc, are pinned to their collar."

Ms Twomey stressed that she is heartened by the support of young and old. 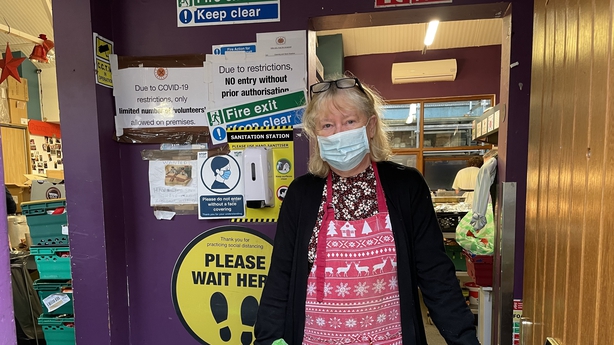 "We had a woman in the other day and she was 94 and she insisted on coming in herself. It is lovely to see all the same people coming back to support us. Young kids also come in."

Over the last few days volunteers have been making hampers in the warehouse and have been on the roads distributing them.

Cork City Missing Persons, retired veterans from the Army and the Navy and gardaí have all dropped off hampers to those in need on behalf of the soup kitchen.

Ms Twomey says she is so appreciative of the "fleet of drivers" who are dropping off hot food today.

"We have a huge list and a big fleet of drivers so the dinners get to people hot. We are geared up. We are ready.

"Every volunteer is working around the clock. I am in awe of the whole lot of them. They go above and beyond.

"This year we have had to reach for the stars on this one because it has been very tough. The demand is crazy."