Witnesses have been urged to come forward after a road crash in Co Limerick yesterday, in which three women in their 70s were killed.

The crash happened on the Listowel side of west Limerick.

One of the women, who was the driver and sole occupant of one of the cars, died at the scene.

The driver and the passenger of the second car were also pronounced dead at the scene.

A third occupant, also a woman in her 70s, was injured.

The three women who died in the crash have been named locally.

Meabh Bradley, from Pallaskenry, Co Limerick, was the driver and sole occupant of one of the cars.

The driver of the second car was Mary Noonan, the sister of former minister for finance Michael Noonan.

Her friend Mary Costello was in the front passenger seat. Both were from the Foynes area, but living in Loghill, Co Limerick.

The injured woman has been named as Mary Griffin. She was a back-seat passenger in the second car and is being treated at University Hospital Limerick for injuries described as non-life threatening.

All three women in the second car were travelling to the Listowel Writers' Week literary festival in Co Kerry. 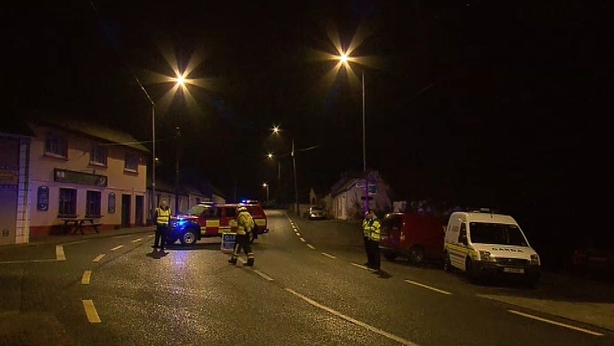 The parish priest of Glin, Co Limerick, has told how he prayed with the victims of the crash.

Speaking on RTÉ's Morning Ireland, Fr Tom Crawford said he was "speechless and helpless" when he came across the "unreal scene" of the tragic accident.

He said that gardaí and fire brigades were at the scene and everyone was working to try and save the woman who was injured.

He said he was shocked and said all he could do was "pray over them as well as I could", adding that life is fragile.

Fr Crawford said it seemed to have "been a terrible accident on a straight stretch of road".

In a tweet, organisers of the Listowel Writers' Week festival said it was "desperately sad" to hear of the crash.

We are desperately sad to learn that those killed in yesterday’s car crash at Loughill we’re travelling to our Festival. Our sincerest sympathy to their families in this awful sad time.