The dive operation to try and recover a body found during the search for missing fisherman Willie Whelan has been suspended for the night.

It's understood a number of dives were undertaken this afternoon and evening by members of the naval diving unit who reached the Alize on the seabed, off the Wexford coast.

This follows yesterday’s location of a body at the site of the sunken trawler by members of the Hook Sub-Aqua Club.

A joint operation had taken place between the Navy, Irish Coast Guard and gardaí to recover the body from the wreck of the Alize.

Willie Whelan, 41, and Joe Sinnott , 65, had been on the Alize fishing for scallops before it sank on the night of Saturday, 4 January.

Mr Sinnott, from Kilmore in Co Wexford, was taken from the sea by crew members of the R117 search and rescue helicopter but pronounced dead in hospital.

The search has been ongoing for almost three weeks for Mr Whelan, who is from Saltmills in Fethard-on-Sea in Wexford, involving multiple State and voluntary agencies, as well as individual fishermen and members of the public. 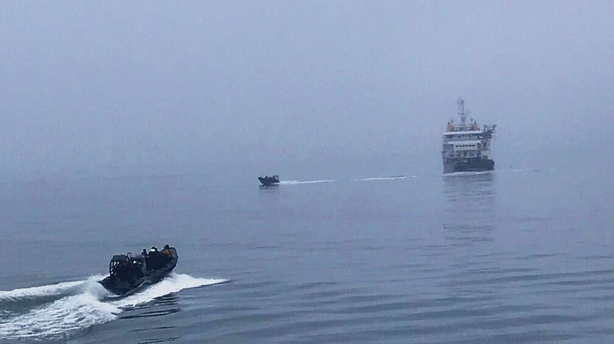 Naval service divers carried out extensive work in the area of the wreck, a number of miles south of Hook Head. Members of the garda sub-aqua unit carried out some dives earlier this week.

Members of the Hook Head Sub-Aqua Club carried out a dive mission yesterday at the scene and one of the divers located a body on the trawler.

Naval divers travelled back to the scene and are using the ILV Granuaile as a diving platform.

Also taking part in the operation are garda specialists and the coast guard.

It is understood the operation presents significant challenges because of the depth of water in which the vessel is lying, as well as material on the boat itself, which may have to be lifted to recover the body.

The LÉ James Joyce has also been on standby in the area.

Two arrests after CAB seizes cars and €22k in cash