Minister for the Environment Eamon Ryan has said businesses in highly polluting sectors - including aviation, shipping and fossil fuels - should be contributing more to tackle climate change.

Making the comments after he returned from the COP27 conference in Egypt, he said there should be less spending on "mega super yachts" and more funding pumped into the basic provisions for people living in countries adversely effected by climate change.

Mr Ryan, who was appointed as the European Union's lead negotiator in loss and damage talks at the climate summit, said the momentum is increasing for climate action.

He said the last-minute deal reached at COP27 will protect the countries most vulnerable to climate change.

There is now more widespread support for the aviation and fossil fuels sector taking on part of the bill to address damage caused by climate change, he said.

"This is not easy - the aviation sector in general, because it's transboundary, doesn't pay the same taxes as other sectors on the likes of fuel, same as shipping," the minister said today.

"The oil and gas sector, to take that one example, this year will make $3.9 trillion in net income, which is twice what it did last year, twice. Our message, and when I say our I mean European Union, is that we should be looking for contributions from those sectors.

"This will not be easy to do because tax is a national competency. But there is now 200 countries agreeing for us to look at how we could do it.

"The reason is because the scale of the problem, the scale of the damage that's already being done, the scale and the losses we can expect to continue as climate change becomes more apparent, more severe, is its those sort of scale of revenues.

"If we just put the burden on a number of Western countries, including Ireland, and say you have to soldier the entire burden of that, we won't be able to do so.

"We won't be able to provide the scale of funds that are needed. People talk about as a mosaic of solutions. So it's not just the aviation, shipping and the fossil fuel industry, not just governments, but also looking at reform of the international financial institutions, so that they, particularly for indebted poorer developing countries can have access to finance.

"It's a whole variety of different solutions we need.

"The developed world is borrowing at 4% and the developing world at 14% and it's those sort of measures, including the recouping some of the extraordinary super profits from the oil sector and gas sector. So maybe there's a bit less money spent on mega super yachts and a bit more spent on the basic provisions and protections people in the developing world want and we stand up."

The 'historic' deal reached at COP27 will mean 'the likes of China, Saudi Arabia and Qatar' will need to contribute more, Minister Eamon Ryan has said.

He said the deal aims to protect the most vulnerable | Read more climate coverage: https://t.co/dqnhoUqNFo pic.twitter.com/V0EbPmX9pe

Mr Ryan made the comments as the Department of Children published the report of the National Youth Assembly on Climate.

The report presents the group's recommendations for consideration to include in Ireland's Climate Action Plan 2023.

The key recommendations from the youth assembly relate to the areas of transport, just transition, agriculture, circular economy and communication.

Mr Ryan said Ireland's new climate plan will "deliver the scale of change" that is needed to hit its climate action targets.

The Government's Climate Action Plan is set to be published in two weeks and will include measures Ireland must take to meet its targets.

Speaking at the launch of the report, Mr Ryan said he is more optimistic about the agreement reached at COP27.

"(The glass) is more full than empty in my mind," he added.

"The reason why more glass half full is because if we got the sense of justice right, that would help us deliver mitigation and reduction in emissions.

"We need to be so fast, the scale of the threat is so great that if you want to get a fast transition it has to be a just transition so people are willing to buy into it." 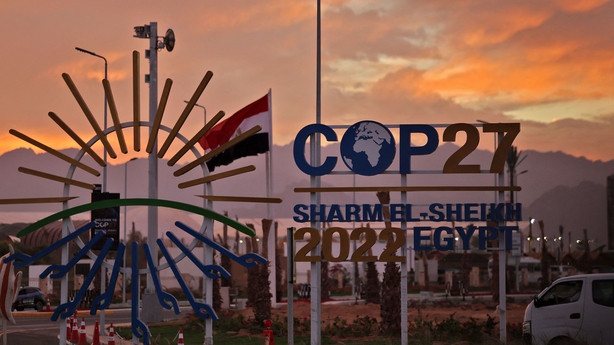 "As Government we are accountable for translating those views into action and young people we know have led the way in terms of calling for stronger, more urgent climate action," he added.

"It is our role in government to listen and it's our role to act. Minister Ryan has assured me that the recommendations of the National Youth Assembly on Climate will be considered as a focus for the Climate Action Plan 2023.

"We'll continue to liaise with our colleagues across government to ensure that the views of young people are taken into consideration as much as possible and acted on in policy-making and in the actions we take on these very important issues."

Earlier today, Mr Ryan said the agreement reached the climate conference over the weekend has to work.
The deal will create a fund for compensating poor nations that are victims of extreme weather worsened by rich countries' carbon pollution.

Poorer nations have long called for funding because they are often the victims of climate-worsened floods, droughts, heatwaves, famines and storms despite having contributed little to the pollution that heats up the globe.

"A transition committee will look at the issue of how we get a range of different funding sources, how we reform perhaps most significantly the global financial system, the IMF, the World Bank, the multilateral development banks, so that they provide better debt relief and financial flows for countries that are in difficulty due to climate," Mr Ryan added.

"Secondly, that we broaden the base of countries who contribute, that the likes of China, Saudi Arabia, Qatar, countries that were back in 1992 designated as developing are now very wealthy and need to contribute.

"Thirdly, we need to protect the most vulnerable."

Speaking after the deal was made at the Sharm El-Sheikh summit, UN Secretary-General Antonio Guterres said this COP has "taken an important step towards justice".

"Clearly, this won't be enough... To have any hope of keeping to 1.5, we need to massively invest in renewables and end our addiction to fossil fuels," he added.

When asked whether the goal of stronger climate-fighting ambition had been compromised for the deal, Mexico's chief climate negotiator Camila Zepeda summed up the mood among exhausted negotiators: "Probably. You take a win when you can."

While there have been some positive outcomes from COP27, the progress needed in terms of addressing the root causes of climate change has not been made, the Energy Policy Officer with Friends of the Earth has said.

Clare O'Connor said the establishment of the loss and damage fund, where polluters pay for the irreversible losses caused, is welcome.

Speaking on RTÉ's Morning Ireland, Ms O'Connor said the need for the loss and damage facility in the first place is not being addressed.

"We're seeing lots of celebrations on this from the Irish delegation and from civil society as well, but it's important to note that we haven't actually ironed out the detail on who's going to contribute to this fund, how much it's going to be, on what exactly losses is going to cover, so we would be hesitant to celebrate this just yet," she said.

"As well as that, we haven't actually addressed the root causes of any of these losses and damages, which is burning fossil fuels extracting and burning fossil fuels, and we saw lots of countries - the EU, the US, Canada - calling for explicit reference to the phase-out of all fossil fuels, coal, oil and gas, in the overarching decision text, and that didn't happen."

The details of the agreement "will be ironed out over the next year and we will hope to see this by the next COP," she said.

"What is needed is clear commitment from polluters to see who exactly is going to pay but also the most important thing needs to be addressed, which is phasing out fossil fuels," she said.

"We need to see that both internationally and on a domestic level."

She said COP has itself been described as having become "lost and damaged".

Marie Donnelly, Chair of the Climate Change Advisory Council, said COP27 "will go down as an historic moment for climate justice, but a missed opportunity for climate action."

She characterised the summit, in the context of following the COP26 meeting in Glasgow, as "half a step forward and half a step back."

She said the half step forward was the loss and damage fund.

"Which at least now is part of the rhetoric within the dialogue of COP; it will take a number of years before it's fully developed and fleshed out - but that's a very positive step forward," Ms Donnelly told RTÉ's Drivetime.

"On the other hand the commitment by the world's major emitters to phase down fossil fuels really did not come through in the final statement.

"Equally in the energy space the suggestion of low emission fuels, implying that gas would be an accepted transition fuel, are pointers to perhaps a lack of ambition, particularly by the major emitters, and the fact they were availing of this opportunity to weaken the text in that respect.,"