A man in his 30s has been arrested in Cork after a van with six children on board rammed into three garda vehicles.

A number of people who were in the vehicle at the time were later taken to Cork University Hospital to be assessed. No serious injuries have been reported.

The incident occurred last night in the Mahon and Carrs Hill areas of Cork.

At approximately 9.45pm, gardaí signalled for a van to stop. It failed to do so and proceeded to ram a garda vehicle.

A short time later, the van stopped but when gardaí attempted to engage with the driver, the garda vehicle was rammed again. 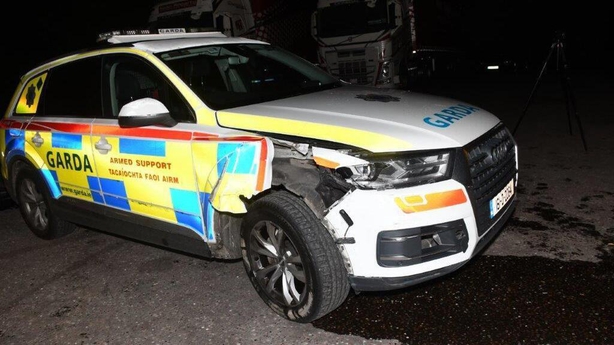 Two additional garda vehicles arrived at the scene and attempted to block the van but both vehicles were rammed.

A number of additional garda units responded and a containment operation ensued.

A stinger device was successfully deployed at Carrs Hill and the vehicle was brought to a halt.

A man was arrested and is being detained at Bridewell Garda Station.

Anyone with any information in relation to this incident or video footage is asked to contact Anglesea Garda Station on (021) 4522000, the garda confidential line on 1800 666 111, or any garda station.