"My latest bill came into me last Thursday and I actually cried when I saw it."

That's how Roscommon supermarket owner and employer of 35 people, Annie Timothy, reacted when she saw her September bill from Electric Ireland.

"I just sat and I cried. We knew power was going up. We did all the right things, but there is no way a business like mine can sustain that kind of thing going forward," Annie told RTÉ News.

The monthly electricity bills to run the shop on the edge of Roscommon town have been skyrocketing since last January. 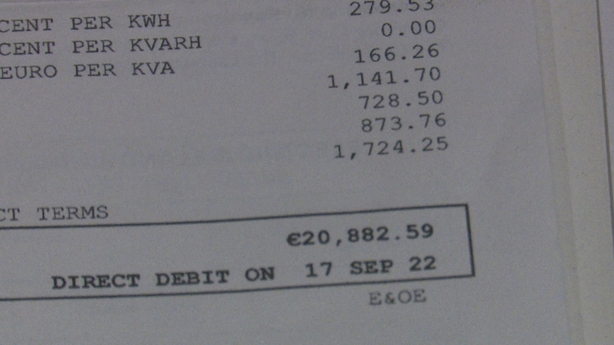 "It's absolutely terrifying at this point in time. As a person I am positive. I always look on the bright side of things. This time I am very, very concerned. There is absolutely no way I can generate the extra turnover to make that money back."

Annie says she and the other retailers she has spoken to, all of whom are in similar situations, now need help from the Government.

The situation is the same for small shops right across the country according to the CEO of the Convenience Store and Newsagents Association.

"It’s frightening because its only just starting and it’s getting worse," Vincent Jennings said.

"We have situations where many of our members have reduced (energy consumption) by 10, 12 or 15%, but the costs have still gone up.

"We have figures for 220, 240 or 300% extra in costs. It's not sustainable and these are viable businesses … that’s the most important thing and nothing is getting in their way other than energy costs."

Mr Jennings said assistance must be given, otherwise stores will have no choice but to close.

"I’m not talking about loans … what we need is genuine assistance both from the EU and the State. Businesses can't sustain an extra €60,000 or €120,000 in the year. They don't have the reserves for it."

Tánaiste and Minister for Enterprise Leo Varadkar has promised that the Government will intervene to help businesses with energy costs, help that will be revealed on Budget day in two weeks' time.

For Annie Timothy and other small business owners, it is going to be an anxious wait.