Gardaí investigating the murder of Lisa Thompson in Dublin last week are trying to identify a man who dropped a document into Finglas Garda Station to contact them.

The document, in the name of the mother-of-two, was handed in to a staff member at the station early last Thursday morning.

Ms Thompson was found stabbed to death at her home at Sandyhill Gardens in Ballymun last Tuesday afternoon.

The 52-year-old was last seen two days before and gardaí believe her body was in her home for some time before it was discovered.

This morning, they issued a fresh appeal for information on what detectives have described as an unusual event.

A man walked into Finglas Garda Station at 7.10am last Thursday morning.

Gardaí say he handed a document in the name of Ms Thompson to a staff member, who is not a garda but was working there, and left without speaking to a garda.

The man did not leave his name and although his image has been captured on CCTV they are still trying to identify him and say they want to make contact with him as a matter of urgency.

We need your consent to load this rte-player contentWe use rte-player to manage extra content that can set cookies on your device and collect data about your activity. Please review their details and accept them to load the content.Manage Preferences
The document he handed in is one of Ms Thompson's personal documents and gardaí believe the man may have information that could prove vital to the murder investigation.

They want to know who the man is, who found the document and where it was found and they are anxious to speak to the man.

Gardaí also say they still have an open mind in relation to the murder and have not yet identified a suspect in the case. 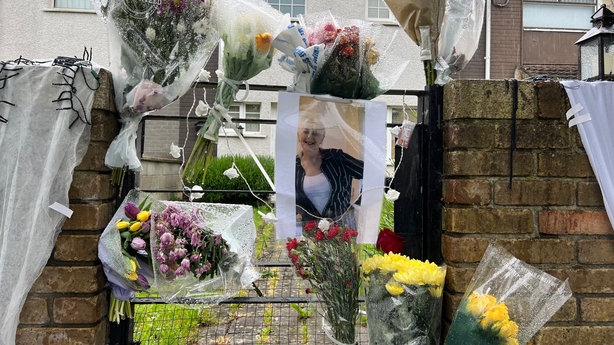 The mother of two young teenagers had been attacked and stabbed possibly up to 12 times at her home in Sallyhill Gardens.

A neighbour alerted the fire brigade, who called the gardaí.

Gardaí also say they are not aware of any threats that had been made against Ms Thompson and that she may have been in the house for two days before her body was found.

They are appealing to the man who dropped the document into Finglas Garda Station last Thursday morning or anyone with any information in relation to the murder to contact them at Ballymun Garda Station on 01-6664400 or on the Garda Confidential Line on 1800-666-111.