A lone sailor, who was at sea for 52 days, was rescued by the RNLI after his vessel got into difficulty off the coast of Co Cork at the weekend.

Pete Currier, a former stage manager for U2 and who has also worked with Nirvana and UB40, left Carriacou in the Caribbean on 13 May with the intention of sailing to Wales.

However, the engine on his 15m ketch 'Sea Symphony' broke down three weeks into his journey.

Having lost both engine and battery power he was attempting to complete his 6,500km journey under sail, but made no progress for ten days as there was no wind.

According to Kinsale RNLI, by the time Mr Currier was within sight of the Old Head of Kinsale, he had lost most of his sails and had no prospect of continuing to his destination.

Kinsale RNLI volunteers had tracked the vessel online throughout the day and grew increasingly concerned for its safety. 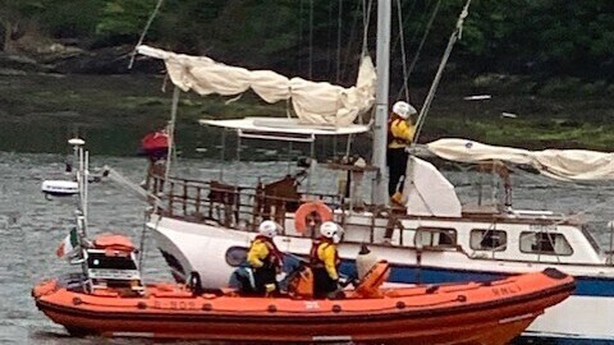 After locating the vessel off the Old Head of Kinsale, RNLI crewmember Felix Milner boarded the vessel and it was decided to tow it to Kinsale Harbour.

Mr Currie was said to be exhausted but uninjured after his time at sea.

After arriving into Kinsale at 9.15pm on Saturday night, he enjoyed his first hot shower in over seven weeks before being reunited with his son and two daughters, who live in west Cork and were waiting for him on the pier.

Mr Currier said: "Volunteers at Kinsale RNLI are some of the nicest people I have ever met. Their expertise and commitment leave me humbled. It is an institution I have always supported and will do so for the rest of my days."

In a post on Facebook, Mr Currier said the "lovely chaps from RNLI" had "offered to take my laundry home and wash it for me. Absolute salt of the earth".

He said he has to make repairs to five of the six sails on board, as well as the engine and three of the winches before he can continue his journey.

Kinsale RNLI Helm Jonathan Connor said: "It is a tribute to the sailor's seamanship that he made a 6,500km voyage single-handed and remained calm and focused despite the many problems he encountered in the course of his journey.

"He is very fit and able but was clearly exhausted after 52 days alone at sea. We were glad to help him over the final hurdle and bring him safely to Kinsale."