1990 saw the end of Margaret Thatcher’s time as British prime minister and her attitude to Europe played a large part in her downfall, write David McCullagh and Donal Byrne.

Secret Irish government documents released under the 30-year rule give a new insight into just how deeply held her views were and how she was really seen by other European leaders.

Thatcher held famously trenchant views on Europe, which were becoming, if anything, more extreme the longer she stayed in office.

In April 1990, as part of a tour of European capitals in advance of a summit in Dublin, Taoiseach Charles Haughey called on her in Downing Street.

When he mentioned the question of "political union", he was treated to a lengthy diatribe from the prime minister. 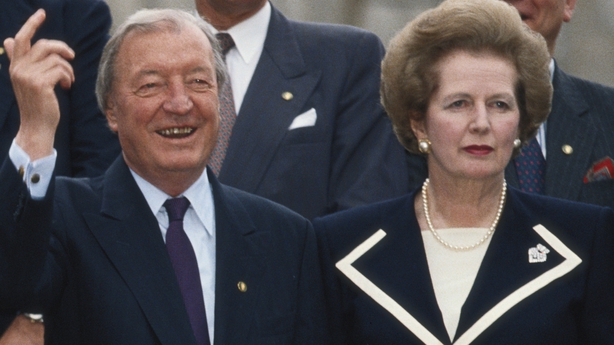 "I am fed up with this rhetoric. Political union means a community of Federal States. No way will I have that. Our history is much older than that ... Try to force this process too far and we will all become subsidiaries of Germany … We need the protection of our sovereignty."

She then went on to dismiss many of the other member states.

"Germany has [only] been in existence for some 40 years. Belgium is simply the Walloons and the Flemings. The Dutch were part of the Hapsburg Empire … Italy was never one nation, Portugal is struggling and needs help … Recently Spain received a warning from the IMF".

Perhaps wisely, she did not make any reference to Irish history.

At a further meeting with Haughey three months later, Thatcher again vented about Europe, and in particular the commission, headed at the time by Jacques Delors.

"Eastern Europe is trying to get to a democratic system. And who is dealing with them? It is now Delors - a mere appointee … The days of appointed commissioners must be numbered. We must give power to the Council of Ministers: I am not handing over authority to a non-elected bureaucracy

"They are just a new Politburo ... I am getting completely fed up with the European Community trying to tie us up with bureaucratic regulations ... They are just too much."

But while Haughey would not have agreed with much of what Thatcher said, he agreed with some of it - and he was not above playing on her prejudices for his own purposes.

He urged her to intervene in the summit debate on greater political integration: "You must use the opportunity to define and put your own imprint on the process ... I would ask that you take a major interest in political union and in the question of more powers for the European Parliament. You must involve yourself in that debate. We find, during our presidency that it is very difficult to get anything through parliament. My personal view is if they get more powers, they will be an impediment to the community."

Evidently, there could be advantages for Ireland in Thatcher’s strong views. And he represented her views reasonably sympathetically to other European leaders, which might have surprised the prime minister.

When Haughey met Helmut Kohl, the German Chancellor was disparaging of his British counterpart, while the Taoiseach was relatively supportive.

Kohl said: "Mrs Thatcher is difficult at present. Her idea of the world is different ... She thinks the empire is at stake. She must understand that we are not in 1901 but are coming towards 2001."

Haughey said: "Mrs Thatcher is not so much concerned militarily but fears a very powerful German economy."

However, her strong views on Europe were becoming more of a political liability at home. Her deputy, Geoffrey Howe, resigned at the start of November 1990, largely because of differences over Europe.

The Irish Ambassador in London, Andrew O’Rourke, outlined the problems facing her: "Her personal image, cabinet disunity, unpopular domestic policies [a reference to the Poll Tax], the economy and Europe", adding that it was the last which was causing most concern within her cabinet.

"There is an implicit recognition [by her Ministers] … that the PM’s off-the-cuff responses in the Commons [on Europe] ... were unnecessarily trenchant and divisive … The cabinet hope to achieve a closing of ranks and a moderation of Mrs Thatcher’s tone."

However, her tone did not change, the ranks were not closed, and having lost the support of her cabinet, Mrs Thatcher resigned on 22 November, to be succeeded by John Major.