Taoiseach Micheál Martin has confirmed the Government is looking at the question of fines in relation to enforcing Covid-19 restrictions.

He told the Dáil that the State's Oversight Committee met this morning to examine ways to enforce Level 3 restrictions.

Speaking at the publication of the Climate Action Bill this afternoon, Mr Martin said a review of existing legislation is under way with a view to introducing "graduated and proportionate fines for minor breaches of regulations".

Asked about potential fines for breaches of Covid-19 restrictions, Taoiseach Micheál Martin says a review of existing legislation is under way with a view to introducing 'graduated and proportionate fines for minor breaches of regulations' | Read more: https://t.co/6efMFrL4ZG pic.twitter.com/qWj6vfuyqh

The Tánaiste said last night that a system of fines may have to be considered for people who break restrictions imposed due to Covid-19.

Leo Varadkar told a meeting of Fine Gael TDs, Senators and MEPs that the Government's primary aim was to secure public buy-in rather than to introduce draconian measures.

Taoiseach Micheál Martin has confirmed the Government is looking at the question of fines in relation to enforcing Covid-19 restrictions | https://t.co/9kdUouUias pic.twitter.com/ddBXXyThVZ

However, Mr Varadkar said if fines were to be introduced, they would have to be both graduated and imposed on-the-spot fines rather than involving the courts.

He suggested an appropriate penalty could be in the order of €50 for not wearing a mask, and €200 for not abiding by travel restrictions.

Mr Varadkar also told the meeting that he was not in favour of giving additional powers to gardaí to enter people's homes over Covid-19 breaches.

He added that the issue of fines had been considered before, but gardaí were opposed to it.

A Government spokesman said this morning: "The law already provides for fines of €2,500 for breach of some laws like organising a gathering or not wearing a mask on public transport.

"All options are under review but there are no plans at present for a new system of fines."

Minister for State Patrick O'Donovan has said Minister for Justice Helen McEntee is open to looking at the prospect of fines for people not adhering to Covid-19 guidelines.

Speaking on RTÉ's Today with Claire Byrne, he said policing by consent is the strategy being implemented by gardaí and that during the early stages of Covid-19 gardaí "only used their powers a handful of times".

Mr Martin also paid tribute to Chief Medical Officer Dr Tony Holohan, saying he met him this morning and they had a "good meeting".

Mr Martin said they "share a determination" to tackle Covid-19.

Taoiseach Micheál Martin says he met Chief Medical Officer Tony Holohan this morning and they had a "good discussion", adding "I pay tribute to his commitment to the country" | https://t.co/F817ZTGkOp pic.twitter.com/LcQBpQlJ44

There had been criticism of Mr Varadkar's comments about the National Public Health Emergency Team and Dr Holohan on Monday.

Mr Varadkar's remarks followed NPHET's recommendation on Sunday to put the country under Level 5 restrictions, however the Government decided to move to Level 3 instead.

Asked about his comments this afternoon, Mr Varadkar said he was "really unhappy" about what happened on Sunday night, but he had spoken to Dr Holohan last night and both men "are on the same team".

Asked about comments he made this week about NPHET, Tánaiste Leo Varadkar says he was 'really unhappy' about what happened on Sunday night, but he spoke with Chief Medical Officer Dr Tony Holohan last night and both men are ‘on the same team’ | Read more: https://t.co/6efMFrL4ZG pic.twitter.com/mWfsXHLCGu

The Level 3 restrictions came into force at midnight as part of the efforts to curtail the recent rise in cases of the coronavirus.

The measures will remain in place until midnight on 27 October, at which point the situation will be reviewed by the Government, based on public health advice.

On the N7 Junction 5 Outbound, Gardaí are asking drivers of any Heavy Goods Vehicles approaching the checkpoint to use lane 3 if possible and safe to do so in order to facilitate the movement of commercial traffic through the checkpoint. pic.twitter.com/cwHF53TpcC

Thousands of gardaí manned hundreds of checkpoints as part of Operation Fanacht to police the Level 3 restrictions, with long delays reported on many busy routes around the country.

A range of restrictions are in effect after the entire country was moved to Level 3 of the Living with Covid-19 plan. Thousands of gardaí are manning hundreds of checkpoints as part of Operation Fanacht, which was set up to police restrictions | https://t.co/iBxlUdWYU0 pic.twitter.com/Aykz74CcPo

Those on educational and essential journeys are entitled to travel, but traffic levels rose last week to 80% of the pre-Covid levels.

Gardaí set up 132 checkpoints across the country this morning and the policing operation also includes high visibility and mobile patrols.

Traffic was delayed on a number of routes as gardaí questioned motorists and assessed whose journey was essential and who was to be asked to turn back.

The Fianna Fáil Parliamentary Party meeting tonight heard some criticism of the garda checkpoints on roads.

It is understood Minister of State Robert Troy told the private meeting that it was counterproductive to delay frontline workers for up to 45 minutes on their way home from work this evening.

He told colleagues the Government had to bring people with them and the best time to place checkpoints on the roads was at night when people were making social calls.

Sources at the meeting said the Junior Business Minister also spoke about the need to close off-licences for a number of weeks.

There were also suggestions at the meeting to give schoolchildren earlier Christmas holidays.

And there were calls to categorise toy shops as essential retail outlets in any further tightening of restrictions.

The Taoiseach also reiterated his concerns about rising Covid-19 levels in Northern Ireland.

Along with engaging, encouraging and explaining the public health restrictions, Mr Harris said that thousands of gardaí are also available to offer support, reassurance and assistance to the elderly, the vulnerable, those living alone or anyone who needs help.

Retired Assistant Garda Commissioner Pat Leahy said the checkpoints are intended as a deterrent and to let the public know that "something has changed" as Level 3 restrictions take hold.

Speaking on RTÉ's Today with Claire Byrne, Mr Leahy said a budget for overtime has been put in place, so these checkpoints should not affect normal policing. 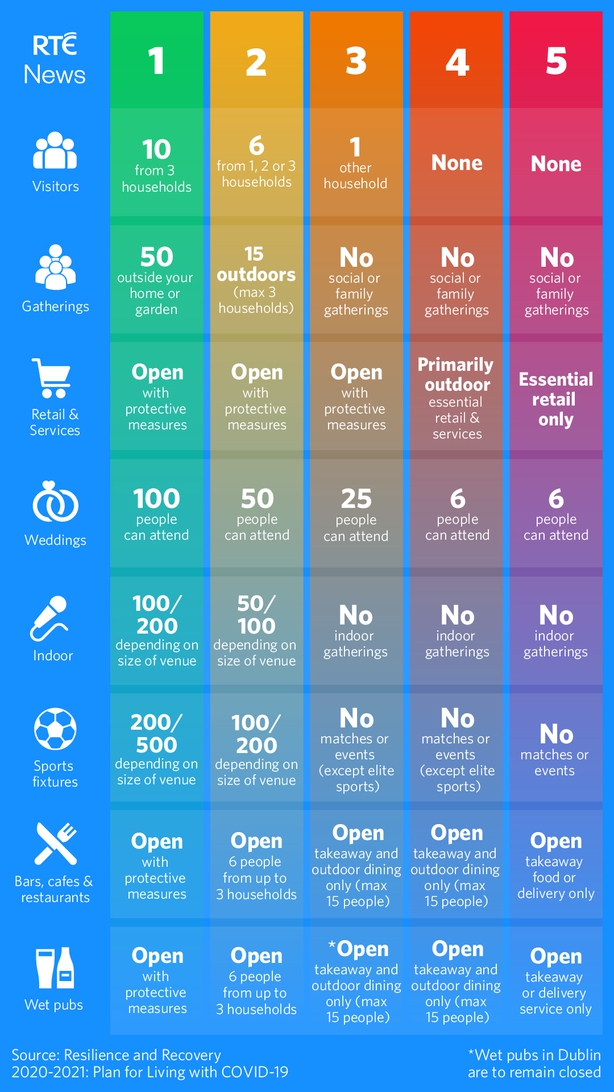 In response to reports of 8km tailbacks out of Dublin, Minister O'Donovan said measures had to be taken to try to suppress the coronavirus.

"We will only make sure that less people die this winter if we all buy into this plan and we need people to reduce their social contact. That is the bottom line." 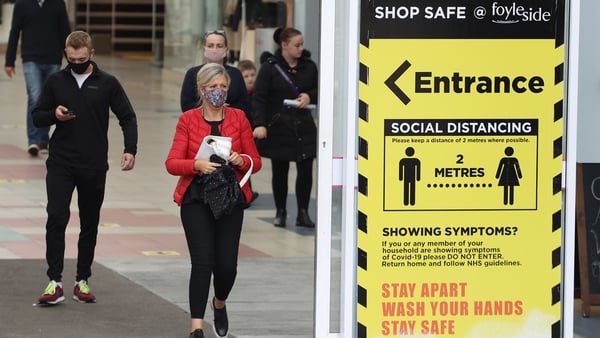