The organisation which spearheaded opposition to Minister Josepha Madigan speaking at a facility run by the Mercy nuns has welcomed their decision to withdraw their offer of the venue.

The Lumen Fidei Institute said hospitals run by the Mercy Congregation in Ireland will be pressured to perform abortions thanks to the success of Ms Madigan and other leaders of the 'Yes' campaign in last May's referendum on the Eighth Amendment.

Yesterday, We Are Church Ireland revealed that their mid-February meeting promoting the ordination of women in the Catholic Church, which is to be addressed by the Minister for Culture, Heritage and the Gaeltacht had been moved to a Dublin hotel after the Mercy nuns withdrew their offer of a venue.

The decision follows receipt by the sisters of what they called many vigorous and some vitriolic and abusive objections to the minister's prominent role in liberalising abortion laws in Ireland.

The meeting was to be the latest in a two-year-long series of monthly gatherings hosted by We Are Church at the Mercy International Centre on Dublin's Baggot Street.

But the organisers say the Mercy International Association was forced about a week ago to withdraw its offer of the venue, because of what they call threats by critics of the minister's role as co-ordinator of the Repeal the Eighth Amendment campaign.

In a letter to the organisers, the association's CEO, Sister Mary Reynolds said it is unwilling to become "the target for anger" directed at the… speaker …and/or the topic and that it would be put at "grave reputational risk" if it ignored "the many and vigorous representations" including threats to bring busloads of protesters to the centre on 11 February.

Noting that most objections have been courteous, Sr Mary laments that some comment has been vitriolic and that at least one of her staff has been intimidated by a caller.

We Are Church has moved the meeting to a south Dublin hotel.

In a blog on the Lumen Fidei website, John Lacken, the Secretary of the lay Catholic group, which describes itself as a promoters of Catholic Church teaching, thanks God for the decision and urges readers to pray for "Josepha's conversion".

Minister Madigan said she regretted that the organisers were forced to change venue and described as "truly disappointing" what she called the targeting of the Mercy International Centre.

Her statement claimed that the issue she would be addressing on 11 February was "entirely separate" from her role as the repeal campaign's co-ordinator.

Minister Madigan underlined that the Health (Regulation of Termination of Pregnancy) Bill 2018 is now law "following a decisive decision by the Irish people".

She said she looked forward to speaking at the event in a new location.

In her letter, Sr Mary also notes that many of the representations referred to Minister Madigan's connection with the abortion referendum even though this topic is not the subject of the minister's planned presentation.

The letter which was written on 17 January said: "We recognise the right of a public representative to deal with topics and legalities of interest and concern to citizens and we do distinguish between State legislation and moral stances informed by our own faith beliefs and conscience." 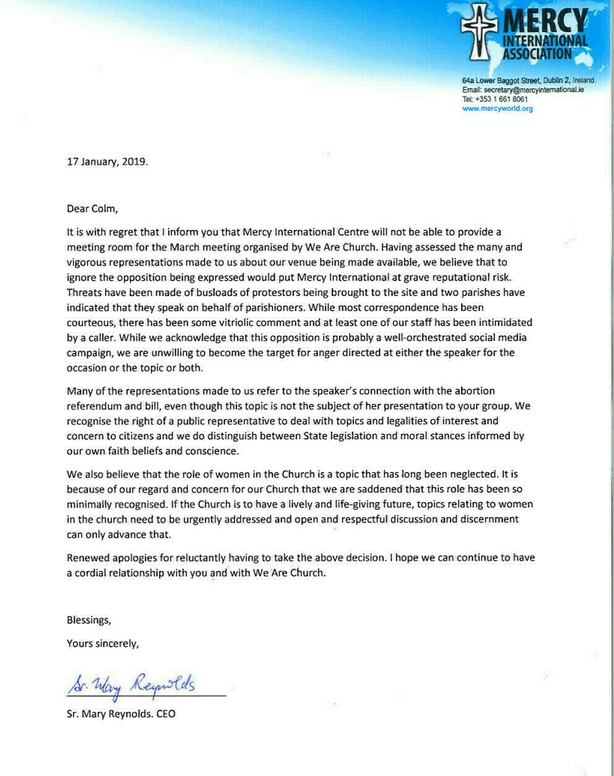 The CEO added that the association believes that the role of women in the Church is a long-neglected topic.

"It is because of our regard and concern for the Church that we are saddened that this role has been so minimally recognised," she said.

"If the Church is to have a lively and life-giving future, topics relating to women in the Church need to be urgently addressed and open and respectful discussion and discernment can only advance that."

Repeating the association's apologies for "reluctantly having to take the… decision", Sr Mary said she hoped that it can continue to have a cordial relationship with We Are Church and its leadership.