The Department of Health has published a redacted version of a report that assesses allegations made by Shane Corr, the whistleblower who exposed the building of dossiers on autistic children.

The report confirms that the Department gathered sensitive information about the children, who were involved in long-dormant legal actions against the State.

The Department also released a parallel report to its Secretary General, Robert Watt, which deals with the same issues.

This internal review said there was no evidence that information such as school reports and medical details were sought "directly" from schools or clinicians.

But it confirmed reports were received from the Department of Education and kept on file as part of what it describes as normal correspondence; that updates were sought from Health Service Executive service managers and community healthcare organisations and that, in six cases, reports from children's clinicians were found on file.

The internal review said it had checked with the HSE to confirm if its information requests on individuals were lawful and no concerns were raised. Had the HSE raised concerns about the practice, the instruction was for this to be noted on the spreadsheets.

The internal review was published in tandem with the report of Conleth Bradley, the senior counsel commissioned to assess the allegations made by Mr Corr.

Mr Bradley said he had reviewed "a large sample of the spreadsheets" kept by the Department.

He agreed with Mr Corr "that some of the information contained in the spreadsheets is sensitive and, in some cases, refers to what are distressing circumstances".

The review was commissioned in 2020 after Mr Corr made a protected disclosure raising concerns about several practices, he became aware of while working as a senior civil servant in the Department.

The Oireachtas Health Committee had called for the report's publication following a series of reports from RTÉ Investigates detailing Mr Corr's concerns.

In relation to the gathering of information about autistic children, the Department has previously said that Mr Bradley's report found its practices to be "entirely lawful, proper and appropriate".

However, while the senior counsel said that managing such information was typical of this type of litigation, he noted in his report that he had not gotten sight of legal advice given to the Department in relation to whether the activity was allowed under data protection law.

The Department had sought the legal advice in relation to requests it made to the Health Service Executive for information, which were made without the knowledge or consent of plaintiffs.

Despite calls in the Dáil for the legal advice to be published, this has not yet happened.

Details regarding the nature of the legal advice that the Department requested have been redacted from the published report.

Mr Corr had also raised concerns that the information included reports from a clinician concerning a child patient.

In his report, Mr Bradley said the clinician initially questioned a Departmental official about whether consent had been given by the parents to provide such details.

The official said consent had not been sought, before going on to withdraw the request for information.

However, the clinician went ahead and provided a detailed report on the child to the Department official. This was subsequently inputted into the spreadsheet containing information on the child.

Mr Bradley’s assessment of these allegations is also partially redacted.

Other redacted sections include summary details from a draft discussion paper for a 2009 meeting with the Attorney General and Chief State Solicitor on "effective strategies for expediting settlements" in SENs cases.

The Minister of State for Disabilities in the Department of Children, Anne Rabbitte, told the Dáil earlier this month that she was not made aware of the existence of Mr Bradley's report until the matters were raised by RTÉ.

Since the matters came to light in March, Taoiseach Micheál Martin has ordered a multi-disciplinary review of the information-sharing practices. The review is being led by the Department of Health.

Separately, the Data Protection Commissioner has initiated a statutory inquiry and sent authorised officers into the Department to assess the material.

Mr Bradley's report also examines allegations made by Mr Corr in relation to the HSE’s role in the provision of care for older people, as well as the provision of accommodation for children and adults with disabilities.

Last week, RTÉ Investigates revealed that the report detailed concerns raised by the Health Information and Quality Authority (HIQA) about a failure to address significant breaches of regulations in nursing homes it runs for older people.

HIQA had told the Department that, in its view, it was not taking action to address non-compliance in several designated centres for older people.

This was "adversely impacting on the quality of life, the wellbeing, privacy and dignity of vulnerable people living in those centres," it wrote.

The report also revealed that HIQA said that children and vulnerable adults in need of emergency placements were being unlawfully placed in unregistered residential services by the HSE because of a lack of suitable accommodation in designated or regulated centres and a failure by authorities to update legislation.

However, significant sections of Mr Bradley's report that discuss the emergency placement issue are redacted from the published version.

These include paragraphs that highlight deficiencies in the law dealing with emergency placements and the need for the HSE to break the law to place children and adults with disabilities into emergency care.

The report also deals with issues raised by Mr Corr in relation to Section 38 and Section 39 agencies, which are funded by the HSE to provide essential services such as mental health care.

The report said Mr Corr had raised issues that dealt with "serious financial matters", in particular at one Section 38 Agency.

This agency was seeking more than €18m in support for the HSE and, of this, it owed more than €3m to the Revenue Commissioners.

Mr Bradley said Mr Corr had raised "very serious matters" but that there was evidence that these were being dealt with by the HSE Audit Committee.

The final section of Mr Bradley's assessment deals with Mr Corr's allegations in respect of an unnamed hospital and an investigation process that occurred after the death of a child.

Mr Corr's allegations related to minutes of meetings that took place involving the Department of Health and the management of the hospital.

The minutes indicated that mangers and doctors at the hospital did not want the investigation report "to come to the attention of the (child's) parents and the public".

However, Mr Bradley said he was not able to access the relevant documents as his assessment was coming to a close.

He recommended that they inquire into the issue and check the relevant minutes from the meeting with the hospital.

While the internal review published alongside Mr Bradley's report confirms many of the allegations made by Mr Corr it says there are other factors to consider.

The Department takes issue with how its information gathering has been characterised.

The internal review notes that there was "no evidence that the Department of Health was secretly compiling dossiers".

But it accepts that it sought "service updates from the HSE" and that it may have documents on file that contain these updates, alongside other information provided to the Department during the proceedings.

The review concludes that it is "appropriate for the Department to establish the actual level of service being provided to the particular plaintiff in question".

Secondly, though it accepts that there were end-of-year school reports and educational assessments in the files, the internal review said "there was no evidence the Department of Health sought updates or reports on plaintiffs directly from schools or the Department of Education".

The internal review also said that it had not "directly" sought medical reports from clinicians. It said the updates were instead "sought from the service managers in the HSE".

However, the review found there were six cases where reports from clinicians were on file. In five of these cases, they relate to a period when the Department was working closely with a health board.

In another case, it said information from a clinician was "inadvertently" sent in 2017 after the Department had channelled its request through the HSE's Community Health Organisation.

The review said that, should this happen again, the clinical report should be sent back and not held on file.

The review said that legal questions about the practices were raised following the introduction of GDPR in 2018.

At the time, it was advised to check with the HSE to confirm if the information it was sharing was gathered lawfully. Where the HSE indicated that the consent of the plaintiffs was necessary, the Department said it would not make a request for an update on the individual.

However, it said the HSE did not raise any issues of this nature.

The review does not otherwise deal with the practice of seeking information from the HSE without consent.

In his report, the senior counsel said he was satisfied that the matters raised by Mr Corr in his protected disclosure came to his attention in the course of his work dealing with preparing responses of the Department to various types of external requests, such as Freedom of Information and parliamentary questions.

Mr Bradley presented his report to the Department of Health in November 2020 and said that, due to difficulties created by the Covid-19 pandemic, he was not able to complete his assessment of all the allegations.

Watch RTÉ Investigates: The Department, The Data & The Disclosure on RTÉ Player. 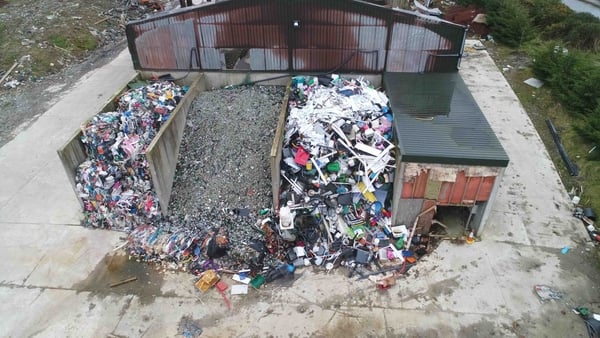