The Glasnevin branch of Hyde and Seek crèche chain, which operated for 14 months without registration, could have been compelled to comply with the registration process some seven months earlier had the Child & Family Agency, Tusla, pursued planned injunctive proceedings to address "grave concerns" about the facility, RTÉ Investigates has learned.

The new purpose-built crèche in Glasnevin on Dublin's northside was one of a chain of Hyde & Seek facilities featured in a recent RTÉ expose Crèches, Behind Closed Doors - investigating standards of care provided by the company.

RTÉ Investigates can further reveal the crèche, which opened in January 2018, was also the subject of eight complaints received by Tusla from concerned parents during the period it went unregistered.

Documents obtained under Freedom of Information legislation and seen by RTÉ Investigates, detail the chain of events which led to the crèche's eventual registration in March 2019 some 14 months after it opened.

Hyde & Seek Childcare made an initial and partial application for registration for its fourth crèche in June 2017.

Five months later Tusla responded to the company requesting 11 documents which remained outstanding in order to complete the application. The documents required included a Fire Certificate and Building Compliance Certificate.

However, RTÉ is also aware the company's original application included outdated garda vetting and references, as well as a safety statement and safe sleep policy which did not meet necessary requirements, all of which the company was asked to resubmit.

Despite these requests, Hyde & Seek opened the crèche without registration in January 2018. It did so without the knowledge of Tusla and therefore was not subject to monitoring and inspections by the regulatory body. 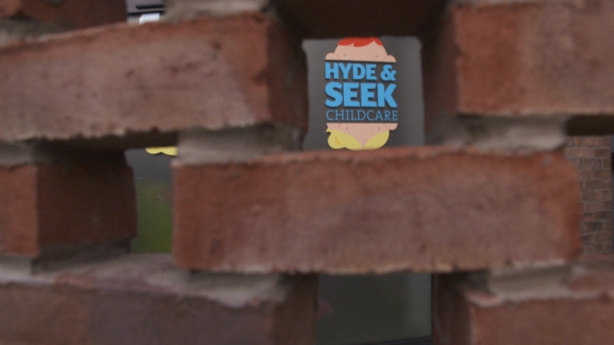 Meanwhile, it has also emerged that Minister for Children Katherine Zappone was alerted to concerns regarding standards of care at the Hyde & Seek Childcare company more than one year ago.

The FOI documents seen by RTÉ reveal in late January 2018 Tusla wrote to Hyde & Seek management informing them it had received unsolicited information they were operating an unregistered crèche.

The body had also received two separate complaints about standards of care at the crèche regarding ratio breaches and concerns staff were employed with immediate starts and without references and qualifications being checked.

Over a month later, having received no response from the company, Tusla again wrote to Hyde & Seek stating it was "very concerned" children were attending their unregistered service.

In fact over the following months, Tusla wrote to the company at least a further four times telling it to cease operation.

Over the same period worried parents continued to complain about the service with Tusla receiving a further six complaints bringing to eight the total number received by the regulatory body regarding conditions at the crèche.

In one letter to the company in the summer of 2018, a senior Tusla official wrote: "You were advised previously to cease operating an Early Years Service until the registration process was completed. The Early Years Inspectorate is gravely concerned about the fact the service has continued to operate and very serious allegations of breaches of regulation have been received."

A further letter stated Tusla remained "… concerned for the health, safety and welfare of the children…" attending the crèche.

In late August 2018 Tusla escalated the matter telling Hyde & Seek it had applied to have criminal proceedings taken against the company and was also "…instructed by the Early Years Inspectorate to issue injunctive proceedings...".

Such action would have seen the company taken to the High Court to ensure it ceased operating without registration.

But, several days later, Hyde & Seek's legal representatives wrote to Tusla stating should the body "…proceed with either of the intimated legal actions…" it would seek "...damages from the Chief Executive of Tusla and/or the appropriate Minister when any application for injunction is being made."

During this period it was also questioned by Tusla if Hyde & Seek's "unlawful" crèche held valid insurance with another letter to the company saying "… service provision in the absence of registration could have a very serious negative effect on the extension of insurance cover."

Earlier this year, Hyde & Seek received the benefit of the Probation Act at the Dublin District Court following a guilty plea to operating a crèche without the proper registration.

There are currently two investigations under way into the Hyde and Seek chain of crèches in the wake of the RTÉ programme, one by Tusla and the other by the gardaí.

Parents kept 'in the dark' over creches - Rabbitte