Boris Johnson has urged French President Emmanuel Macron to accept the return of migrants who cross the Channel to England.

The British Prime Minister said: "An agreement with France to take back migrants who cross the Channel through this dangerous route would have an immediate and significant impact."

In a letter to Mr Macron, he set out a five-point plan to tackle the migrant crisis following the deaths of 27 people in the English Channel when their boat sank yesterday.

It comes after President Macron said he was requesting "extra help" from the UK today as authorities revealed that pregnant women and children were among those who died.

Mr Johnson said the plan, which includes joint patrols to prevent boats from leaving France as well as the bilateral returns agreement, would have "an immediate and significant impact" on crossings.

He also suggested that the agreement would be in France's interest by breaking the business model of criminal gangs running the people smuggling trade from Normandy.

The five points of the British Prime Minister's plan, which he announced on Twitter, are:

Mr Johnson said: "If those who reach this country were swiftly returned, the incentive for people to put their lives in the hands of traffickers would be significantly reduced.

"This would be the single biggest step we could take together to reduce the draw to Northern France and break the business model of criminal gangs.

"I am confident that by taking these steps and building on our existing cooperation we can address illegal migration and prevent more families from experiencing the devastating loss we saw yesterday."

Earlier, British Home Secretary Priti Patel said the drownings were a "dreadful shock" and described the crossings as "absolutely unnecessary" after renewing an offer of sending British officers to join patrols on French beaches during a call with French interior minister Gerald Darmanin.

The UK government later confirmed Ms Patel would meet Mr Darmanin over the weekend to discuss the response to the crisis, while Home Office officials and law enforcement officers will travel to Paris tomorrow "to intensify joint co-operation and intelligence-sharing".

But the scale of the problem was further illustrated by new figures from the UK Home Office showing asylum claims there have hit their highest level for nearly 20 years, fuelled by soaring Channel migrant crossings and a rise in numbers following the coronavirus pandemic.

As French politicians pointed the finger at UK authorities for failing to tackle the issue, two more small boats carrying desperate individuals were believed to have arrived on British shores.

One group wearing life jackets and wrapped in blankets were seen huddled together on board an RNLI lifeboat before disembarking in Dover this morning. High winds put a stop to the crossings later in the day.

The French prosecutors' office investigating the incident said the dead included 17 men, seven women and two boys and one girl believed to be teenagers. 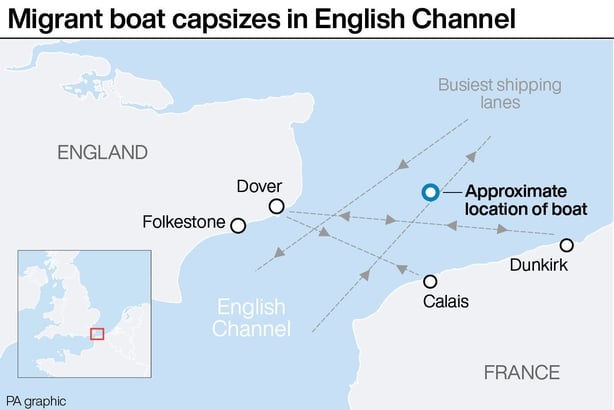 Following a meeting of the Cobra emergencies committee, Mr Johnson said it was clear that French operations to stop the migrant boats leaving "haven't been enough" despite £54 million (€64 million) of UK support, adding that the people traffickers are "literally getting away with murder".

However, Mayor of Calais Natacha Bouchart said it is the British who are to blame and called on Mr Johnson to "face up to his responsibilities".

"The British government is to blame. I believe that Boris Johnson has, for the past year and a half, cynically chosen to blame France," she said, according to French media reports.

Franck Dhersin, vice president of transport for the northern Hauts-de-France region, said the "mafia chiefs" at the top of the trafficking networks live in the UK and must be arrested.

President Emmanuel Macron said France was merely a transit country for many migrants and more European cooperation was needed to tackle illegal immigration.

"I will ... say very clearly that our security forces are mobilised day and night," Mr Macron said during a visit to the Croatian capital Zagreb, promising "maximum mobilisation" of French forces, with reservists and drones watching the coast.

"But above all, we need to seriously strengthen cooperation... with Belgium, the Netherlands, Britain and the European Commission."

Before yesterday's disaster, 14 people had drowned this year trying to reach Britain, a French official said.