The French government has sacked the top police official in Paris following another weekend of rioting in the capital during "yellow vest" protests, which have put President Emmanuel Macron on the defensive.

The police's failure to keep the Paris protests from spiralling out of control over the weekend again cast a harsh spotlight on their tactics.

About 5,000 police were deployed in the capital on Saturday, far outnumbering the several hundred black-clad rioters who caused havoc in front of groups of often passive policemen for more than seven hours on the famed Champs-Elysees.

"The events of last Saturday, in particular on the Champs-Elysees, were unacceptable and the president asked the government to provide a response that was up to the needs of the situation," Prime Minister Edouard Philippe said in a televised statement.

After criticising "inappropriate" instructions on the use of rubber bullets given to security forces, he announced that the head of Paris police, 66-year-old Michel Delpuech, had been fired and would be replaced on Wednesday.

He said French authorities would ban rallies on the Champs-Elysees and elsewhere if hooligans were detected there, adding that fines would be increased from €38 to €135 for people attending unauthorised protests.

More than 100 businesses were damaged at the weekend in Paris including dozens of luxury shops and restaurants on the Champs-Elysees. 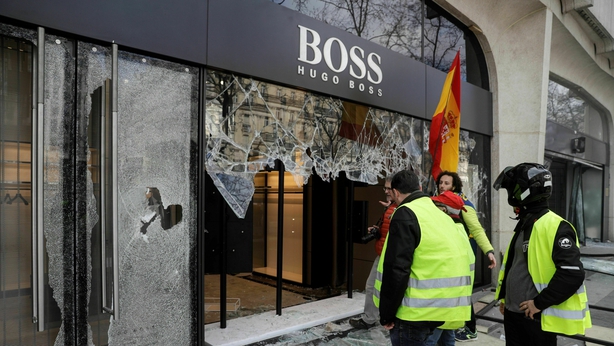 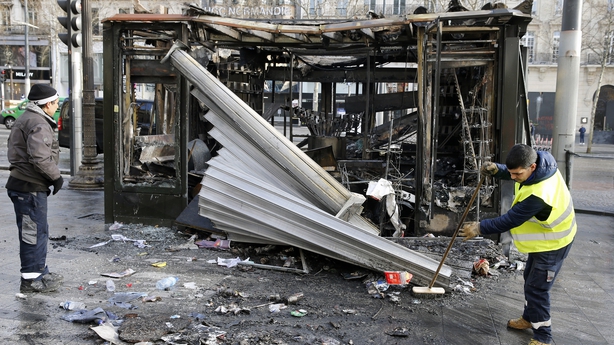 Since the end of December, the number of "yellow vest" protesters has fallen, but each Saturday thousands still take to the streets, including far-right and far-left groups as well as anarchists who are responsible for much of the violence.

A hard core of protesters have already vowed to cause havoc again next Saturday.

Some have called for French police to be far more active in tackling troublemakers.

"You have to take responsibility and engage, with the possibility that people will get hurt," said Frederic Lagache of the Alliance police union.

For decades, French authorities have usually preferred the opposite, controlling mass protests with tear gas and rubber bullets while avoiding physical confrontation between police and large groups, experts say.

Although some protesters have been injured by the rubber bullets, so far nobody has been killed in clashes with police, but officials say the risk would increase if officers charged the hostile crowds.

"They would rather see a building damaged, with insurance companies footing the bill, than risk direct contact between police and demonstrators that might cause serious injuries or death," said Olivier Cahn at France's Cesdip law enforcement research institute.

But critics say the government needs to drastically rethink its approach for stamping out the rioting.

"There are techniques and strategies for separating violent demonstrators from the others," Mr Cahn said.

"Germany has strategies for de-escalating the tensions and separating protesters that are quite effective."

Junior Interior Minister Laurent Nunez admitted on RTL radio on Monday that police "were less aggressive, less reactive than usual" over the weekend, promising a review of the instructions given to officers and their deployment.

Mr Castaner, a long-time ally of Mr Macron who had no law-and-order experience before becoming interior minister in October, is also facing renewed scrutiny of his record amid calls for his resignation from some in the opposition Republicans party.

While seen as too lax on Saturday, French authorities have been accused on other weekends of being too heavy-handed, highlighting the government's difficulty of managing the crisis.

The UN rights chief Michelle Bachelet called for a "full investigation" into the possible use of excessive force by French police during the protests in an address on 6 March.

Since the demonstrations began on 17 November, some 1,900 people have been hurt, including dozens who have suffered serious injuries from stun grenades or rubber bullets fired by police.

Rights groups have tried to have the heavy rubber bullets used by the French police banned, noting that France is one of only a handful of Western countries to use them.