While much is still to be revealed about these elections, in particular who will win the 11 European seats that can be occupied immediately and who will win the two that will await events in the UK, there seems little doubt about some of the major trends.

Most notably we have the second coming of the Green party, which appears to be close to second place in the Europeans and is likely to be a more formidable force in several local authorities. It also suddenly stands it be in key player in the negotiations that will inevitably follow the next general election.

Big decisions were made by the party in 2007 and these did not turn out well, but they cannot be avoided because of that. The second is that Fine Gael and Fianna Fáil are closely matched in the local elections, and while it remains to be seen who comes out as the biggest party, there will be no very clear winner.

On the European front, FG looks likely to repeat its strong showing from 2014, and in that arena, there is a clear winner. Sinn Féin has not had a good election, again, in neither locals nor Europeans, while Labour’s comeback is not apparent.

There appear to be big differences in party performance in the two sets of elections. This is far from being unprecedented, but the fluidity of party loyalties is more marked than ever before.

According to the RTÉ exit poll, one in every two voters supported a candidate from different parties in their two first preference votes. This is considerably more than the 38% who did so in 2014, the 41% in 2009 and the 42% who did so in 2004 when these two sets of elections were held together.

After the massive changes in party support after the crash, some saw signs of a new equilibrium being established, albeit with FF as no longer dominant. Yet Friday’s voting suggests we may be entering an era of even more change.

Table 1 shows the poll results for the local and European elections, and the movements in bodies of voters underlying the differences between the two. 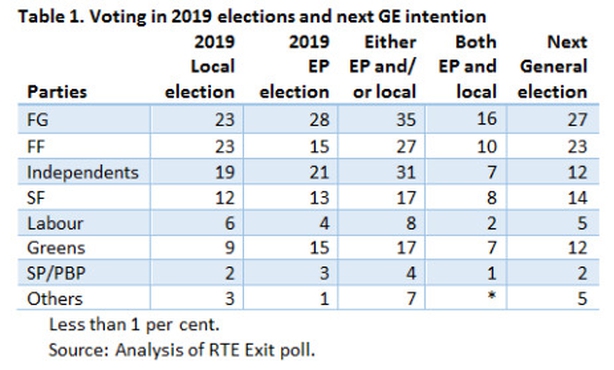 The results of course may be slightly different but there is no reason to think that this invalidates the patterns we see underlying them. One way to view the results is to ask how did parties compare in terms of the number of voters they were appeal to attract in at least one of the contests.

FG comes out well in this respect, attracting more than one in three voters. This points to a sizable reservoir of support, but FG’s challenge will be to mobilise that next time out. We can also see that a much smaller number, fewer than 1 in 6 voters, were willing to vote FG in both elections.

Their current standing for the next election is in the high 20s in this poll, and in many recent ones.

FF’s reservoir is smaller, at 27%, with only a little over a third of these casting a vote for FF in both elections. SF and the Greens seem quite evenly matched with 17% supporting in one or the other this time, but just 8% and 7% respectively giving each party both votes. 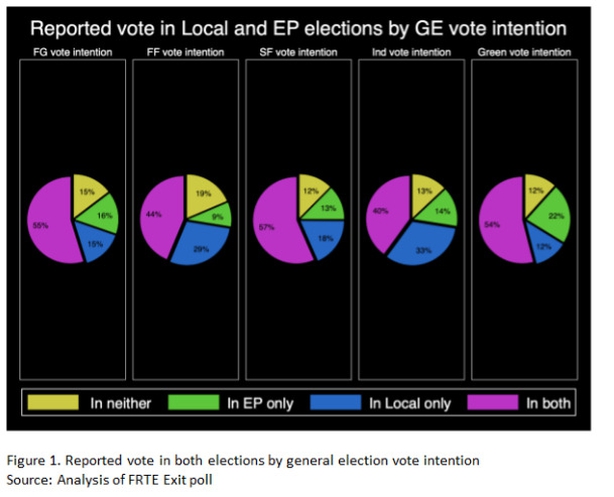 In 2014 Independents had the biggest potential support and they remain a very significant force with 31% voting independent on Friday.

This group does not look so strong in terms of support at a hypothetical general election but when that time comes, incumbent independents are likely to push that figure upwards. There is also a significant body of support for other small parties, all pointing to an increasing fragmentation of the party system.

We can look at this further by exploring the stability party by party according to vote intentions at the next election. FG, SF and the Greens all show a similar pattern: around 55% of their general election vote gave consistent support, with local and European only support evenly distributed.

FF and Independents did not mobilise such consistent support, and both were more successful at getting 'their' support out in the locals. We saw just the same pattern for Independents in 2014, but in that set of elections FF was able to get almost two third of its voters to support it in both elections, as did SF. Overall though, all parties saw fewer of those who said they would vote for it at a general election willing to do so in both locals and Europeans.

One further trend apparent is the likely success of many women candidates, particularly on the European stage. It is possible that a majority of MEPs from Ireland for 2019-2024 could be women. In an earlier piece, I explored the role of women voters in this respect, asking about the extent to which they might tend to opt for a female over a male candidate, other things being equal. 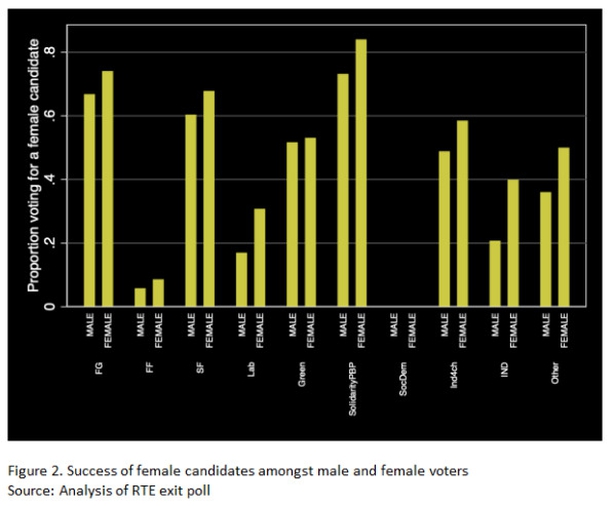 Based on the RED C/RTÉ exit poll, it does seem that women voters did – as in 2014 – show a slight preference for female candidates.

The poll indicates that 50% of women cast their first preference for a woman in the European elections, whereas only 41% of men did so, a slightly bigger difference that was found in RTE’s 2014 exit poll. This holds across all parties, as is shown in Figure 2. This also holds for second preferences.

The downside of this for women candidates is that this implies men were less to support women, if by small margins. But there are normally more male voters.

Has there really been a swing to the left and what is the 'left'?